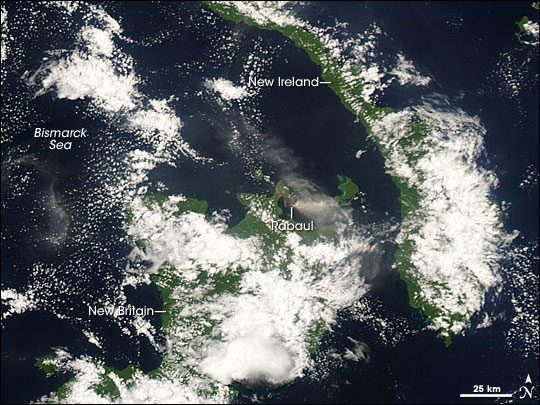 Rabaul Volcano released a plume of ash and steam on September 28, 2008. The Moderate Resolution Imaging Spectroradiometer (MODIS) on NASA’s Aqua satellite captured this image the same day. In this image, the plume contrasts slightly with the nearby clouds due to its gray-beige color. Nearest the summit, the plume blows eastward, but faint traces of the plume appear in the northwest and southeast. This apparent change in the plume’s direction might result from different wind directions at higher altitudes.

On the northeastern tip of New Britain, Rabaul is a pyroclastic shield volcano composed of rock material left by previous eruptions. Prior to a major eruption in 1994, which occurred simultaneously with the eruptions of two nearby volcanoes, Rabaul’s caldera had been used as a harbor by Rabaul City.