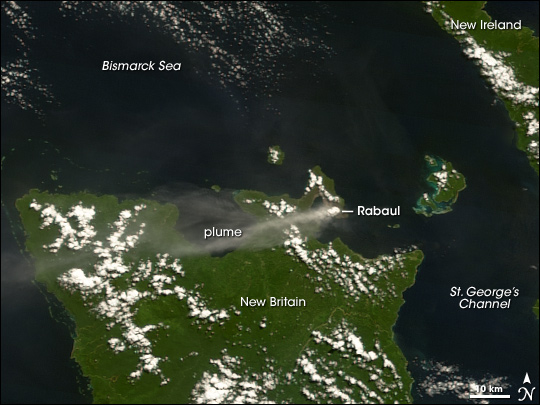 New Britain’s Rabaul Volcano released a plume in late July 2008. The Moderate Resolution Imaging Spectroradiometer (MODIS) on NASA’s Terra satellite captured this image on July 23, 2008. The plume can be distinguished from the clouds in this image by its slightly darker color and more diffuse shape. The plume blows west-southwest over the northern end of New Britain and the Bismarck Sea.

On the northeastern tip of New Britain, Rabaul is a pyroclastic shield volcano composed of rock material left by previous eruptions. Prior to a major eruption in 1994, which occurred simultaneously with the eruptions of two nearby volcanoes, Rabaul’s caldera had been used as a harbor by Rabaul City.