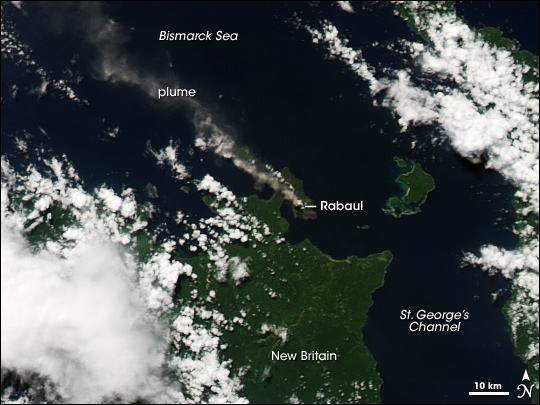 In early July 2008, Rabaul Volcano on the northeastern tip of New Britain released a plume. The Moderate Resolution Imaging Spectroradiometer (MODIS) on NASA’s Aqua satellite captured this image on July 3, 2008. In this image, the volcano’s plume differs from the nearby clouds in both color and form. Whereas the clouds are bright white with distinct margins, the plume is more diffuse in shape with a dingy gray-beige color. The relatively dark color of the plume suggests volcanic ash mixed with water vapor.

Rabaul is a pyroclastic shield volcano composed of rock material left by previous eruptions. The volcano’s low, broad shape resembles that of an ancient warrior shield. Prior to a major eruption in 1994, which occurred simultaneously with the eruptions of two nearby volcanoes, Rabaul’s caldera had been used as a harbor by Rabaul City.