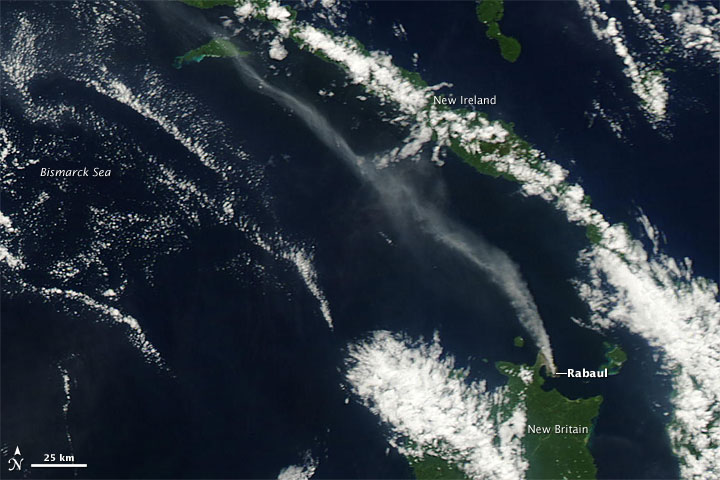 Rabaul Volcano on the island of New Britain released a plume of ash and/or steam on August 28, 2009, as the Moderate Resolution Imaging Spectroradiometer (MODIS) on NASA’s Aqua satellite captured this true-color image. The volcanic plume blows toward the northwest, running roughly parallel to the coast of New Ireland. Unlike the nearby clouds, the plume is slightly darker in color, with more diffuse outlines.

According to an August 27 bulletin from the U.S. Air Force Weather Agency, Rabaul had just sent a volcanic plume 140 nautical miles (260 kilometers) toward the northwest, over the Bismarck Sea. Observed a day later, this plume appears to follow the same trajectory.

Rabaul is a pyroclastic shield volcano. Composed from broken rocks and debris from earlier eruptions, it has a wide perimeter and low profile resembling an ancient warrior shield. Before a major 1994 eruption that forced a large-scale evacuation, Rabaul had served as a natural harbor for the city of the same name. 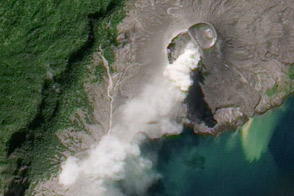 Rabaul Volcano released a plume of ash and steam on the afternoon of September 10, 2009.

Rabaul Volcano released a plume of ash and steam on the morning of September 30, 2009.