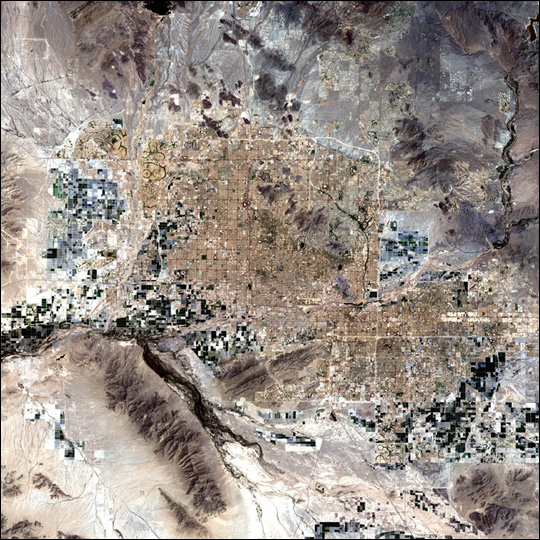 Situated in southern central Arizona, Phoenix is the state’s capital and largest city. Home to about 1.3 million residents, it is the United State’s seventh largest city. Located in the northeastern corner of the Sonoran Desert, Phoenix sits on the northern shore of the Salt River, which can be seen running east to west through the center of this scene. Across the Salt River are the towns of Tempe and Mesa, to the south and southeast. Phoenix is actually surrounded by 22 towns and cities that have grown so closely together in recent decades it is almost impossible to distinguish one from another in this 30-meter-resolution satellite image. The large cluster of light brown pixels gridded by horizontal and vertical lines (roads and highways) demarcates the greater Phoenix urban area.

Hundreds of years before the first Europeans arrived in North America, an industrious and civilized community of Native Americans occupied the lands in and around Phoenix. Historians believe these inhabitants thrived in the “Valley of the Sun” from 700 A.D. to 1400 A.D. These Native Americans were skilled farmers. As the valley receives little rainfall and no spring snow melt, the inhabitants constructed more than 125 miles (200 km) of canals to draw freshwater from the Salt River to support their settlements and sustain their crops. No one knows why these inhabitants disappeared, but historians suspect they were destroyed or driven away by a long-lasting drought. Centuries later, other Native Americans observed the ruins and the vast network of canals left behind by these inhabitants and named them Ho Ho Kam, or “people who have gone.”

About 500 years passed before human settlement returned to the Valley of the Sun. In 1867, a farmer named Jack Swilling traveled through the region and stopped to rest his horse at the foot of the White Tank Mountains. When he saw the wide, flat expanse of the valley floor and the dry, brown soil that was rich in minerals and devoid of rocks, he knew water was all that was needed to farm the land. Within months he had founded the Swilling Irrigation Canal company and began building a canal to bring fresh water from the Salt River water into the lands of the valley. By 1868, water flowed through the canal and more settlers soon followed. After some debate about what they should name their new town, one of the settlers named Darrell Duppa suggested Phoenix, after the mythical Egyptian bird that was burned in its nest only to arise from the ashes more beautiful than ever. Duppa reasoned that theirs was a new town arising from the ruins of a previous settlement. The name was officially adopted on May 4, 1868. (To learn more about Phoenix and its history, read Out of the Ashes.)

The modern history of Phoenix has been characterized by remarkably rapid growth. By 1920, Phoenix was a major American city with a population of more than 29,000. Ten years later the population had nearly doubled, and nearly doubled again by 1950 when Phoenix was home to more than 105,000 residents. The city’s land area that year was roughly 17.1 square miles. Fast forward to the year 2002 and the city had expanded to almost 470 square miles and was home to 1.3 million residents.

The local economy is driven mainly by agriculture (note the gray and green rectangular patterns around the fringes of the city), high-tech industry, and tourism. Phoenix is a popular tourist destination due to its warm, dry year-round climate and large number of resorts and golf courses. It is also close to some of the United State’s most spectacular natural wonders.

This true-color image of Phoenix was acquired by the Enhanced Thematic Mapper plus (ETM+), flying aboard the Landsat 7 satellite, on May 11, 2002.