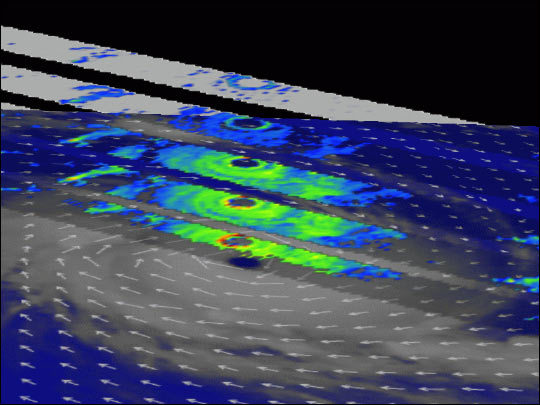 This dramatic image synthesized from NASA and NASDA’s Tropical Rainfall Measuring Mission (TRMM) satellite, the NASA QuikScat satellite, and Meteosat 5 cloud imagery captures Super Typhoon Kalunde just as it was achieving peak intensity late in the day on March 7, 2003. The most powerful typhoon of the season to form in the South Indian Ocean, Kalunde’s sustained winds peaked at almost 260 km (162 miles) per hour on March 8. Mercifully, this typhoon intensified over wide open ocean without immediate threat to land.

The combined satellite image shows the clockwise swirl of fast winds around the low-pressure eye (QuikScat). Multiple horizontal slices through the heart of Kalunde at different vertical levels (1, 3, 5, 7 and 9 km) reveal the rain structure within the storm. Note the near-perfect symmetry of the rainbands and the core ring of intense rains that define Kalunde’s eyewall.

Additional images of hurricanes and other TRMM data visualizations can be found at the TRMM Web site.