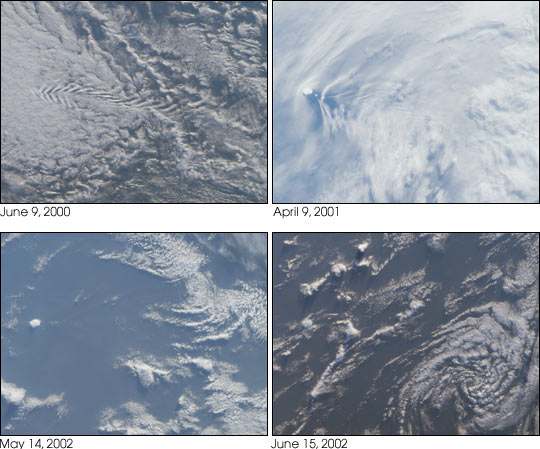 Here’s another chance to play geographical detective! These four images from the Multi-angle Imaging SpectroRadiometer (MISR) cover the same geographic area but were acquired on four different dates. Each image was acquired by MISR’s vertical-viewing (nadir) camera and encompasses an area measuring 257 kilometers x 195 kilometers. North is toward the top.

This mystery concerns a small island located near the western edge of the observed area. In the top two images, the island presents an obstacle to the westerly winds, and wake patterns in the cloud layers are visible downstream of the island’s location. In the lower left image, the island is visible within a relatively clear area of open ocean. In the lower right image, the island is partially obscured by cumulus clouds, and a spiral cloud pattern associated with an atmospheric depression is visible in the southeast quadrant.

The Terra satellite, with MISR aboard, flies in a polar orbit and daylight images such as these are acquired as the spacecraft flies from north to south. Terra’s orbit is “sun-synchronous”, and when the satellite crosses the daylight equator the local time beneath the spacecraft is approximately 10:30 a.m. The four images shown here were processed identically, and relative variations in brightness between the different views have been preserved.

Using any reference materials you like, please answer the following 5 questions:

Quiz Rules
E-mail your answers, name (initials are acceptable if you prefer), and your hometown by Tuesday, July 16, 2002, to suggestions@mail-misr.jpl.nasa.gov.

Answers will be published on the MISR web site ( http://www-misr.jpl.nasa.gov) in conjunction with the next weekly image release. The names and home towns of respondents who answer all questions correctly by the deadline will also be published in the order responses were received. The first 3 people on this list who are not affiliated with NASA, JPL, or MISR and who did not win a prize in the last quiz will be sent a print of the image.

A new “Where on Earth...?” mystery appears as the MISR “image of the week” approximately once per month. A new image of the week is released every Wednesday at noon Pacific time on the MISR home page. The image also appears on the Atmospheric Sciences Data Center home page, http://eosweb.larc.nasa.gov/, though usually with a several-hour delay.