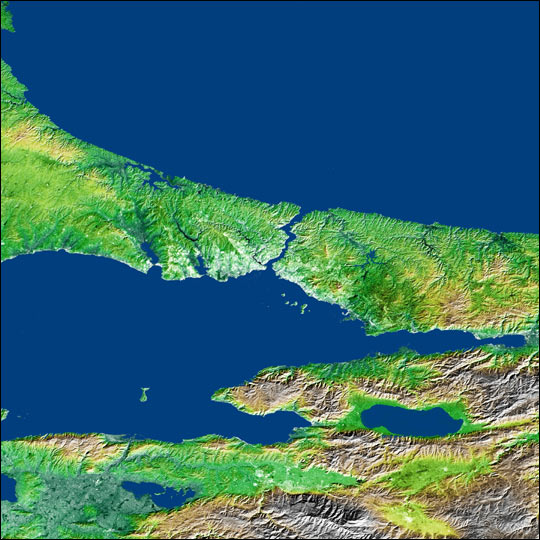 The Bosporus is a strait that connects the Black Sea with the Sea of Marmara in the center of this view of northwest Turkey, taken during the Shuttle Radar Topography Mission (SRTM). The water of the Black Sea at the top of the image and Sea of Marmara below the center are colored blue in this image, along with several large lakes. The largest lake, to the lower right of the Sea of Marmara, is Iznik Lake. The Bosporus (Turkish Bogazici) Strait is considered to be the boundary between Europe and Asia, and the large city of Istanbul, Turkey is located on both sides of the southern end of the strait, visible as a brighter (light green to white) area on the image due to its stronger reflection of radar. Istanbul is the modern name for a city with a long history, previously called Constantinople and Byzantium. It was rebuilt as the capital of the Roman Empire in 330 A.D. by Constantine on the site of an earlier Greek city, and it was later the capital of the Byzantine and Ottoman empires until 1922.

Three visualization methods were combined to produce this image: shading and color coding of topographic height and radar image intensity. The shade image was derived by computing topographic slope in the northwest-southeast direction. Northwest-facing slopes appear dark and southeast-facing slopes appear bright. Color coding is directly related to topographic height, with green at the lower elevations, rising through yellow and brown to white at the highest elevations. The shade image was combined with the radar intensity image to add detail, especially in the flat areas.