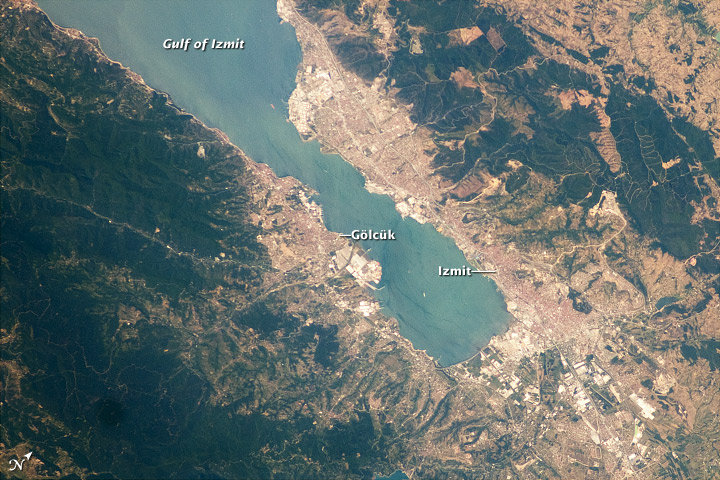 One of the most industrialized areas of Turkey lies at the eastern edge of the Sea of Marmara, at the end of the Gulf of Izmit. The long, narrow waterway provides ship access to the cities of Izmit and Gölcük. This astronaut photograph highlights the metropolitan area of Izmit along the northern and eastern shores. Commercial and industrial centers—including petroleum refineries and automobile factories—are recognizable by large structures with white rooftops. The city of Izmit, then known as Nicomedia, was part of the Roman Empire and served as its easternmost capital before Constantinople (modern-day Istanbul) assumed that role in 330 AD. Izmit is located approximately 83 kilometers (52 miles) to the east-southeast of Istanbul.

The smaller city of Gölcük on the southern shoreline of the Gulf is the location of a Turkish naval facility and another automobile factory. Both urban areas are built primarily on flat lowlands adjacent to the Gulf, with green vegetation marking highland areas to the north of Izmit and south of Gölcük. Both the Izmit and Gölcük areas were severely damaged by a magnitude-7.4 earthquake on August 17, 1999, that resulted in over 17,000 fatalities. The earthquake occurred along the North Anatolian strike-slip fault that extends roughly east-west beneath the Gulf of Izmit.

Astronaut photograph ISS024-E-10162 was acquired on July 31, 2010, with a Nikon D2Xs digital camera using a 180 mm lens, and is provided by the ISS Crew Earth Observations experiment and Image Science & Analysis Laboratory, Johnson Space Center. The image was taken by the Expedition 24 crew. The image in this article has been cropped and enhanced to improve contrast. Lens artifacts have been removed. The International Space Station Program supports the laboratory as part of the ISS National Lab to help astronauts take pictures of Earth that will be of the greatest value to scientists and the public, and to make those images freely available on the Internet. Additional images taken by astronauts and cosmonauts can be viewed at the NASA/JSC Gateway to Astronaut Photography of Earth. Caption by William L. Stefanov, NASA-JSC.