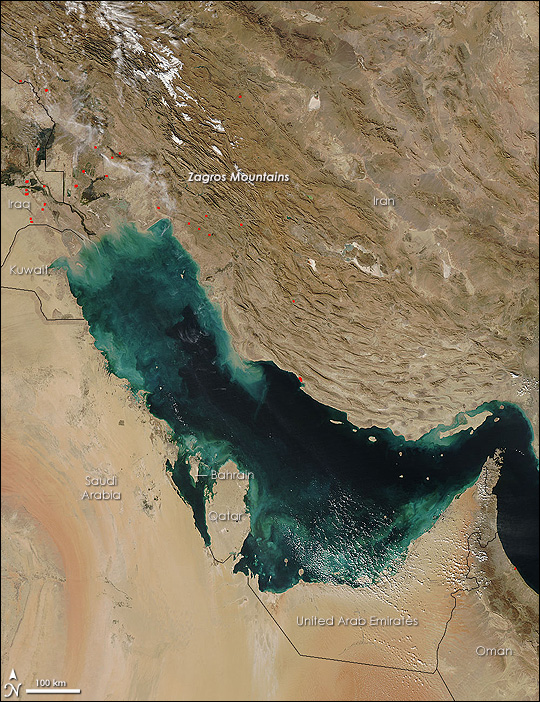 Clouds of tan, blue, and green swirl fancifully along the shores of the Persian Gulf in this photo-like image, captured by the Moderate Resolution Imaging Spectroradiometer (MODIS) on NASA’s Aqua satellite on November 28, 2007. Near the shore, the color is almost certainly sediment washing into the gulf, turning the water tan and then green and finally blue as it disperses. Some of the color may also be sediment churned up from the gulf’s shallow bed in the north near Iraq and along its southwestern shore. The gulf is deeper on the east near the Iranian shore, where the water is clear and black.

Much of the dirt clouding the water in this image is coming from the Shatt al Arab River, which enters the Gulf in the north along the Iran-Iraq border. The river drains the combined waters of the Euphrates and Tigris Rivers of Iraq and the Karun River of Iran. Though other rivers empty into the Persian Gulf, most of the fresh water that enters the gulf comes from the Shatt al Arab. On the right edge of the image is the narrow Strait of Hormuz, which connects the Persian Gulf to the Arabian Sea, part of the northern Indian Ocean.

The Persian Gulf is flanked by the Arabian Peninsula with its vast tan, pink and white sand deserts on the southwest and the dry mountains of southwest Asia on the northeast. The wetlands and rivers of Mesopotamia border the gulf on the north. The gulf itself sits on the edge of the Arabian Plate, the slab of earth that carries much of the Middle East. The Arabian Plate is moving slowly northeast under the Eurasian Plate. The edge of the overriding Eurasian Plate is folding and buckling under the pressure, creating the Zagros Mountains of Iran. The mountains run in long lines parallel to the plate edge. Snow dusts the mountains in the north. The region is rich in oil, and the red dots that typically mark fire locations in MODIS imagery may actually be gas flares in the oil fields, particularly along the northern shore of the gulf in Iran and Iraq.

Dust Storm in the Persian Gulf