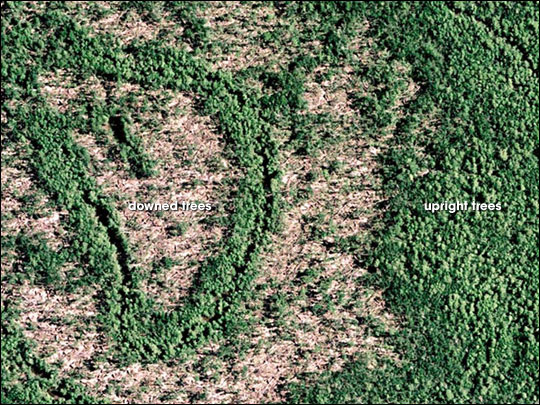 Besides its destruction to homes and human lives, Hurricane Katrina dealt a severe blow to the U.S. Gulf Coast’s forests. Using NASA satellite data, a team of researchers at Tulane University and the University of New Hampshire concluded that the hurricane destroyed or severely damaged some 320 million large trees. Besides felling trees, the storm changed the role that many Gulf Coast forests play in the global carbon budget.

Acquired in late 2005, this aerial photograph shows an area of forest in the Pearl River Basin, which extends from central Mississippi to the Louisiana border. Although forest damage is obvious, it is hardly uniform. Next to wide swaths of felled trees, intact forest remains. Cypress and tupelo trees proved more resistant to Katrina’s winds than other species in this area, including oak, maple, and sweetgum. So while some hardwood trees lie in tatters in this image, more resilient trees remain upright.

Just as trees differ in their ability to resist winds, forests differ in their ability to store carbon. Young and growing forests, including those that had flourished along the Gulf Coast, are particularly effective in sucking carbon dioxide from the air through photosynthesis. These forests subsequently store carbon in plants and soils, acting as carbon sinks. After a hurricane snaps millions of branches and trunks—as Hurricane Katrina did in Mississippi, Alabama, and Louisiana—photosynthesis slows, drawing less carbon dioxide from the atmosphere. In addition, microorganisms that decompose the resulting dead vegetation release a hefty dose of carbon dioxide into the atmosphere. In short, Katrina converted many Gulf Coast forests from carbon sinks to carbon sources.

The research team concluded that the carbon released by Gulf Coast forests after Hurricane Katrina approximated 60 to 100 percent of the carbon stored by all the forests in the United States in an average year. If warming temperatures caused by greenhouse gas emissions increase the likelihood of tree-destroying storms, a self-reinforcing cycle could develop in which hurricane-damaged forests release more carbon into Earth’s atmosphere, enhancing global warming.

To conduct this study, the research team used a combination of remote sensing, computer models, and field investigations. Starting with Landsat imagery of the Pearl River Basin, along the Louisiana-Mississippi border, the team calculated the amounts of green vegetation, surface litter, wood, dead vegetation, soil, and shade. Comparing Landsat images taken at the same time of year before and after the storm, the team developed maps of tree mortality and damage. Next, the team compared changes detected by Landsat (which sees smaller areas in greater detail) to those detected by the Moderate Resolution Imaging Spectroradiometer (MODIS) (which sees a larger area with less detail) to scale up the damage around to Pearl River Basin to the Gulf Coast region affected by Katrina.