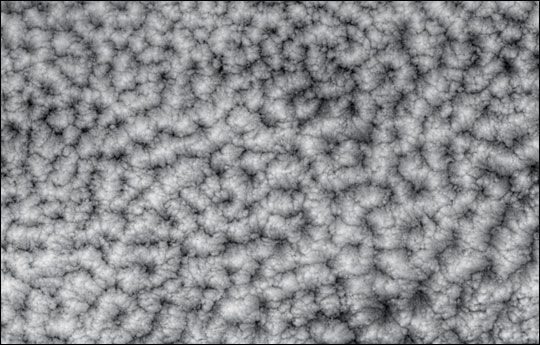 The structure of tightly packed ‘closed cells’ in a layer of marine stratocumulus over the southeastern Pacific Ocean are highlighted in these views from the Multi-angle Imaging SpectroRadiometer (MISR). Closed cell clouds are formed under conditions of widespread sinking of the air above. As heat is radiated to the atmosphere, the top of the cloud cools. The cool air sinks along the cell boundaries and this sinking motion perturbs the shallow cloud layer into interesting structures such as those shown here. These cells are notably small, with diameters ranging from 10-15 kilometers, instead of the 15-45 kilometers typically noted in satellite observations. The dark areas along the cell boundaries are also cloudy and do not indicate clear sky. Closed cell clouds are found in high pressure systems characterized by weak winds, and are thought to occur preferentially over cold ocean waters. The image covers an area of about 280 kilometers x 227 kilometers.

An overview image showing some of the meteorological context, and a natural-color and inverted image pair are also provided. The cell structure and the distinctive radial patterns indicative of the sinking air motions are easier to see clearly in the inverted view. The area covered by the overview on the left is 274 kilometers x 463 kilometers, while the right-hand images each cover 278 kilometers x 62 kilometers. All of the images were created with data from MISR’s vertical-viewing (nadir) camera, and were acquired on November 19, 2001 (during Terra orbit 10228). The scenes are centered roughly at 38 degrees south latitude and 118 degrees west longitude.

Low-lying marine stratocumulus clouds are important components in the Earth’s energy budget because they are bright and abundant, and reflect a large amount of solar energy toward space. They are difficult to represent in climate models however, due to their variable structure and rapid changes in reflectivity over short distances.