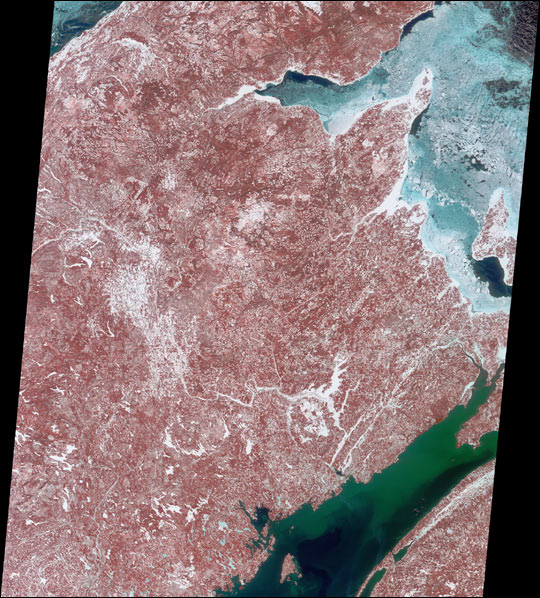 Decked out in reds, greens, blues and whites, this Multi-angle Imaging SpectroRadiometer (MISR) image highlights the Canadian province of New Brunswick. Located above image center are the Christmas Mountains, a region of old-growth forest nestled in a remote wilderness. Within these hills are peaks named for eight of Santa’s reindeer: Dasher, Dancer, Prancer, Vixen, Comet, Cupid, Donder, and Blitzen. Two other peaks are named North Pole and St. Nicholas.

The image combines data from the nadir camera’s blue, green, and near-infrared bands to produce this false-color view. Vegetation shows up in shades of red, and sediment in the Bay of Fundy (lower right) takes on a green color. Ice in the Gulf of St. Lawrence (upper right) and in frozen lakes and rivers appears in hues of blue and white. The picture includes parts of eastern Maine at the left and Quebec’s Gaspé Peninsula at the top, and covers an area measuring 380 kilometers x 470 kilometers. It was acquired on March 8, 2001.