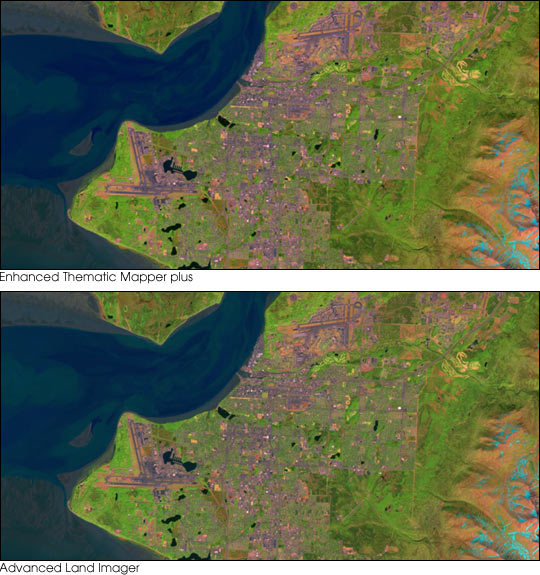 This pair of images compares the views of two similar sensors over Anchorage, Alaska, on the morning of June 2, 2001. The top scene was acquired by the Enhanced Thematic Mapper plus (ETM+) aboard the Landsat 7 satellite. The lower scene was acquired about a minute later by the Advanced Land Imager (ALI) aboard Earth Observer-1. Each image uses the 1.65, µm, 0.79 µm, and .565 µm wavelength bands as red, green, and blue, respectively. Both sensors were designed to measure similar wavelengths at similar resolutions. The ETM+ uses a spinning mirror to direct light into a single sensor for each wavelength of light it measures. On the other hand, the ALI uses a line of solid-state detectors (similar to a digital camera) that view the Earth’s surface as the satellite orbits. The ALI is less expensive, smaller, and lighter than the ETM+, but the large number of detectors make it difficult to calibrate. To evaluate the differences between the ETM+ and ALI, and determine if technology similar to that of the ALI is suitable for collecting data comparable to that of the Landsat satellites, scientists are now comparing matching scenes from the two instruments. As can be seen by these two images, the sensors produce data that are quite similar.

The thick brown plume of ash, steam and volcanic gas rising from Anak Krakatau in this true-color image from November 17, 2010, is a common sight at the volcano