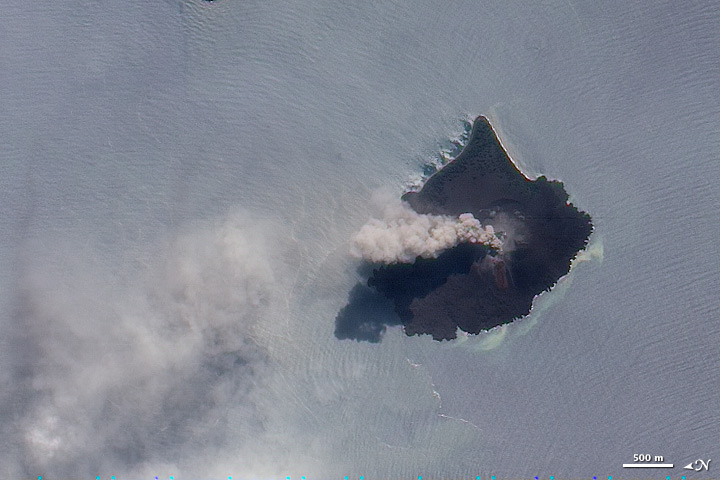 The thick brown plume of ash, steam and volcanic gas rising from Anak Krakatau in this true-color image is a common sight at the volcano. Responsible for one of the largest and most destructive eruptions in Indonesia’s history, Krakatau still erupts frequently. For this reason, the volcano is one of 100 that NASA automatically monitors with the Earth Observing-1 (EO-1) satellite, as detailed in the Earth Observatory’s new feature article, Earth Observing-1: Ten years of Innovation.

Throughout the summer and fall of 2010, Krakatau erupted hundreds of times a day, but by November 17, when the Advanced Land Imager (ALI) on NASA’s Earth Observing-1 (EO-1) satellite took this image, activity at the volcano had started to slow. The image was taken as part of Volcano SensorWeb, a program that automatically schedules the ALI and Hyperion sensors on EO-1 to image volcanoes when other satellites detect signs of activity. ALI provides a detailed, photo-like view, useful for tracking ash, while Hyperion records the temperature and position of lava flows.

SensorWeb was not a part of EO-1’s original mission. The Earth Observatory’s feature article explains:

“EO-1 has two separate computer processors with 256 megabytes of extra memory each,” says mission manager Dan Mandl. That may seem paltry compared to a modern desktop computer, but it was enough to reshape a spacecraft’s mission. “It meant we had excess capacity to try new things.”

The first new software loaded onto EO-1 was the Autonomous Science Experiment, an onboard intelligent scheduling tool that allows the satellite to decide for itself which images Hyperion and ALI should take. Because the satellite can think for itself, the system can accept a target request as late as five hours before the satellite flies over the target, compared to 2-3 days required for most other sensors. The on-board scheduler prioritizes requests based on what they are for (ranked by theme) and the weather.

“It’s a customer-driven method of running a mission,” says Mandl. Anyone from an archeologist to a disaster response agency can request images....

To read more about EO-1’s primary mission, and its other achievements during the past decade, see Earth Observing-1: Ten years of Innovation.

The thick brown plume of ash, steam and volcanic gas rising from Anak Krakatau in this true-color image from November 17, 2010, is a common sight at the volcano