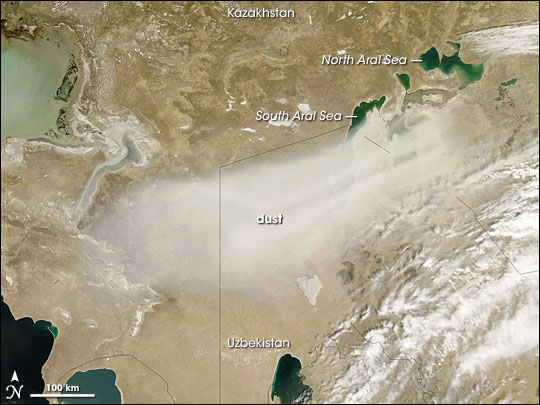 A large dust storm blew westward from the Aral Sea in late April 2008. The Moderate Resolution Imaging Spectroradiometer (MODIS) on NASA’s Aqua satellite acquired this image on April 29, 2008. In this picture, beige plumes form a large arc that crosses the border between Uzbekistan and Kazakhstan. Some clouds appear in the east, and they could be associated with the same weather system that kicked up the dust.

Dry lake bed sediments provide plentiful material to be blown by dust storms, and such sediments surround the Aral Sea. It is not a real sea but an inland freshwater lake, and it used to be the world’s fourth-largest lake. Due to river diversions, it began retreating in the 1960s, and its water level fell enough to split it in two: the North Aral Sea and the South Aral Sea. Thanks to conservation efforts, the North Aral Sea had begun to recover by the spring of 2007. The South Aral Sea, however, continued to decline.