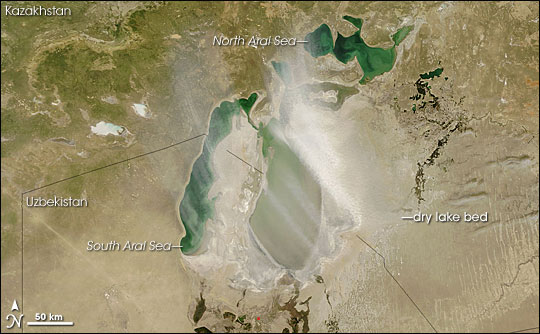 A dust storm formed over the South Aral Sea on the border between Kazakhstan and Uzbekistan on May 9, 2007. The Moderate Resolution Imaging Spectroradiometer (MODIS) on NASA’s Terra satellite took this picture the same day.

As with a larger storm that occurred just two days earlier, this dust storm arose from a few plumes west of the Aral Sea, but primarily from sediments around the Sea itself. Dried-up lake beds provide material for dust storms, and the Aral Sea’s lake beds can be easily discerned in this image, appearing in a lighter shade of beige than the surrounding land.

Not a real sea but an inland freshwater body, the Aral Sea was once the world’s fourth-largest lake. Due to river diversions, it began retreating in the 1960s, its water level falling low enough to split it in two: the North Aral Sea and the South Aral Sea. By the time this picture was taken, the destinies had diverged for the northern and southern portions of this lake. Thanks to conservation efforts, the North Aral Sea had rebounded by the spring of 2007. The South Aral Sea, however, continued to decline. Dry lake bed sediments blown aloft in this image appear to originate primarily from the land surrounding the South Aral Sea.