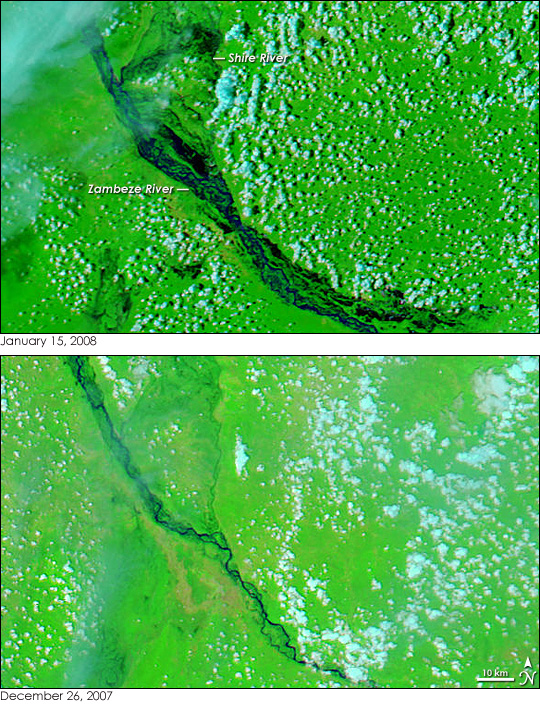 The Zambeze (Zambezi) River in central Mozambique was still rising when the Moderate Resolution Imaging Spectroradiometer (MODIS) on NASA’s Aqua satellite captured the top image on January 15, 2008. Compared to conditions on December 26, three weeks earlier, the river was kilometers wider than normal. Early rains fell over the Zambeze River basin in Zimbabwe throughout December, taxing the massive Cahora Bassa reservoir meant to control flooding on the Zambeze. By January, water was being discharged from the reservoir, and this led to flooding downstream.

The images show the Zambeze River downstream from the Cahora Bassa reservoir near the border of the Sofala, Tete, and Zambézia provinces. Water is dark blue or black in the images, which were made with infrared and visible light. The surrounding plant-covered land is bright green, and scattered clouds are pale blue and white. Bare earth is tan. Not only is the Zambeze River flooded in the January 15 image, but its tributaries, including the Shire River, are also swollen. Twice-daily images of the floods in Mozambique are available from the MODIS Rapid Response System.

Summer flooding is common on the Zambeze, but in 2007-2008, the floods rose a month earlier than normal. By January 15, water levels already rivaled those seen during the devastating floods of 2000-2001, which killed 700 and displaced 500,000, reported the Deutsche Presse Agentur. Resettlement, preparation, and evacuation prevented a similar disaster in 2008, said the International Federation of Red Cross and Red Crescent Societies.

Despite the flood danger, the Zambeze flood plain is an attractive place to live because of the fertile soils it offers subsistence farmers. As of January 13, approximately 62,000 people had been evacuated from the Zambeze River Valley in Mozambique, said the Mozambique News Agency. The government planned to evacuate thousands more by airlift and boat. The floods could persist or worsen as the rainy season progresses through February and March. Late summer could also bring flood-inducing tropical cyclones from the southern Indian Ocean.