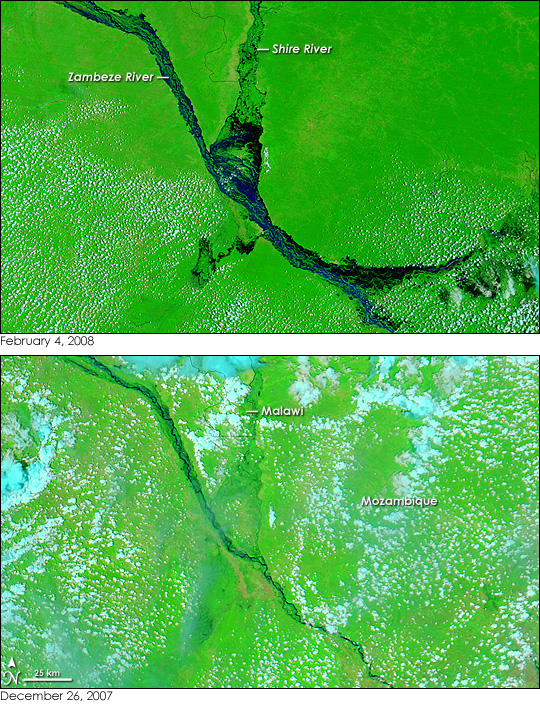 The rain clouds cleared to give the Moderate Resolution Imaging Spectroradiometer (MODIS) on NASA’s Terra satellite an unimpeded view of the swollen Zambeze River on February 4, 2008. In the top image, the Zambeze (Zambezi outside of Mozambique) runs wide over its banks. The difference between the river’s extent on February 4 and December 26 (lower image) can be measured in kilometers. In places, the river’s primary channel can be seen, a black line running through a sea of blue. The Shire River, which flows into the Zambeze from Malawi, was also flooded.

One of Africa’s longest rivers, the Zambeze cuts across southern Africa, emptying into the Indian Ocean. The lower reaches of the river flow through a wide, flat plain in Mozambique, where it is prone to seasonal floods. During the 2007-2008 rainy season, the intense rains usually seen late in the season came early, bringing floods. By February, parts of the Zambeze had exceeded water levels last seen during the disastrous floods of 2000, which killed 700 and displaced 500,000. Advanced preparation mitigated the impact in 2008. As of January 29, approximately 95,000 people had been displaced by flooding in Mozambique, reported the United Nations. Water levels on the rivers were predicted to rise as the rains continued into February, said the United Nations.

These images were made with both infrared and visible light to provide greater contrast between water and land. Water is black or dark blue. The plant-covered landscape is bright green, and clouds are pale blue and white. Similar images and photo-like true-color images are available from the MODIS Rapid Response System twice daily.