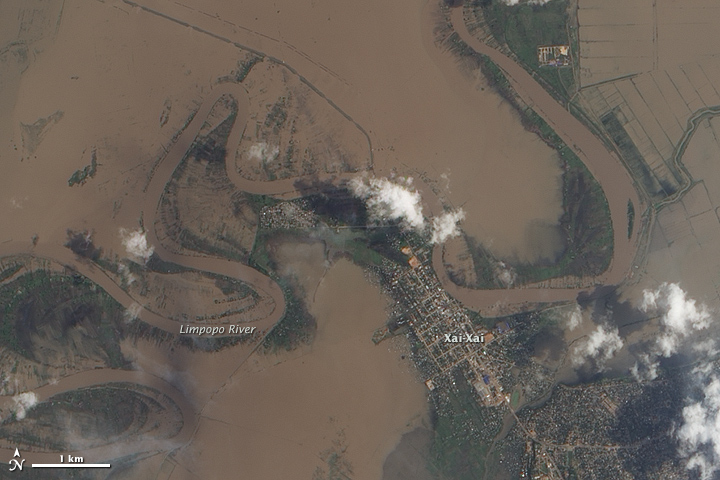 After days of torrential rain pushed the lower Limpopo River over its banks in late January 2013, flood water surrounded the city of Xai-Xai in southern Mozambique. The Advanced Land Imager (ALI) on NASA’s Earth Observing-1 (EO-1) satellite captured this natural-color image on January 31.

Xai-Xai is situated about 10 kilometers (6 miles) from the ocean, where the Limpopo River meanders over a flat coastal plain. In late January, muddy water not only filled the river channel, but also washed over agricultural fields. Muddy water could even been seen in the rectangular street grid of Xai-Xai.

The United Nations Institute for Training and Research (UNITAR) anticipated the flooding. On January 29, the institute reported that flood water had reached the northern edges of Xai-Xai; that the airport was inundated; and long stretches of roads had been flooded. UNITAR reported that the high water on the Limpopo—which had already inundated Chókwé—would continue to drain southward.

Flood waters were not confined to the lower Limpopo River. According to Voice of America and other news sources, flooding also struck the Zambezi River in northern Mozambique, as well as parts of Zimbabwe, Botswana, and South Africa. On February 2, Agence France-Presse reported that the death toll in Mozambique had reached 68, and the estimated number of people affected ranged from 180,000 to 250,000. News sources compared the current flood levels to those seen in the year 2000, when severe flooding claimed several hundred lives.