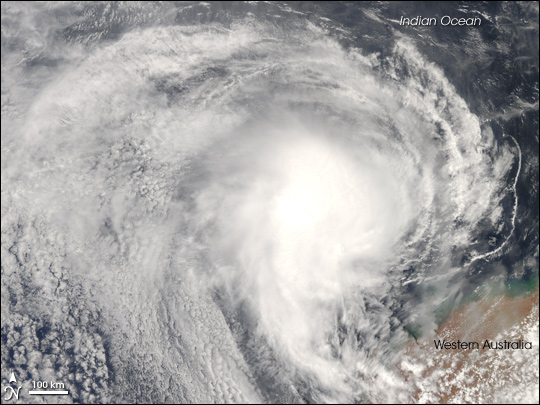 Tropical Cyclone Melanie had an impressive appearance on December 30, 2007, as the storm swirled off the coast of Western Australia. Fortunately, the storm, which had sustained winds of 125 kilometers per hour (70 miles per hour), did not come ashore, and it brought only moderate storm conditions to the sparsely populated coast.

The Moderate Resolution Imaging Spectroradiometer (MODIS) on NASA’s Aqua satellite acquired this photo-like image at 2:10 p.m. local time (6:10 UTC) on December 20, 2007. The storm had basic spiral structure, with long arms of cloud wrapping around its center in a clockwise direction (characteristic of Southern Hemisphere cyclones). However, the storm system lacked a distinct eye, one indicator that it was not a powerful storm.

You can also download a 250-meter-resolution KMZ file of Tropical Cyclone Melanie suitable for use with Google Earth.