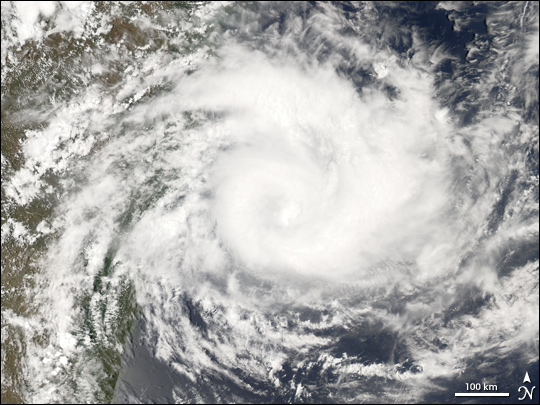 Tropical Cyclone Clovis formed off the coast of Madagascar on December 31, 2006, becoming an organized tropical storm system as the new year began. Heading south roughly parallel to the Madagascar coast, it was predicted to hit southern Madagascar on January 3, according to the U.S. Joint Typhoon Warning Center on January 2, 2006. Forecasts on January 2 predicted that the storm would not develop significantly before striking land, with a predicted strength of Category One, with sustained winds of around 129 kilometers per hour (80 miles per hour).

This photo-like image was acquired by the Moderate Resolution Imaging Spectroradiometer (MODIS) on NASA’s Aqua satellite on January 2, 2007, at 1:30 p.m. local time (10:30 UTC), while the storm’s center was passing through the straits between eastern Madagascar and Reunion Island. Clovis had the recognizable shape of a southern hemisphere tropical cyclone, with spiral arms showing its clockwise rotation. There is a distinct circular eye at the center of the storm, filled with clouds (known as a “closed” eye). Though well-formed and defined, the storm system was not as large as a more powerful system would have been, and its closed eye structure also hints that, while certainly a serious storm, it was not a particularly powerful cyclone.