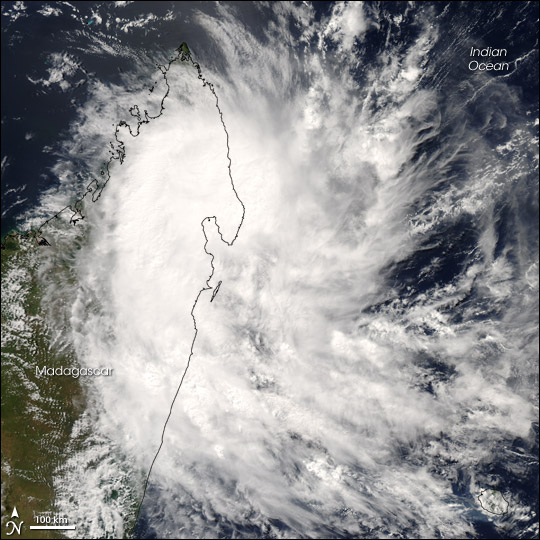 Tropical Cyclone Jaya came ashore in northern Madagascar in the morning of April 2, 2007 at around 11:00 a.m. local time (08:00 UTC). The storm formed in the Indian Ocean on March 30 and traveled westward toward Madagascar as predicted. What was not predicted, however, was its explosive growth in power from a strong tropical storm to a powerful Category 3 cyclone in just 36 hours, according to figures provided by the University of Hawaii’s Tropical Storm Information Center.Fortunately, the intensification took place while Jaya was still far from Madagascar.

This photo-like image was acquired by the Moderate Resolution Imaging Spectroradiometer (MODIS) on the Aqua satellite on April 3, 2007, at 1:15 p.m. local time (10:15 UTC). The storm was a tropical cyclone with a circular shape, but no distinct eye at its center. According to the University of Hawaii’s Tropical Storm Information Center, Cyclone Jaya’s sustained winds had fallen in strength to roughly 125 kilometers per hour (80 mph) at the time this image was acquired.

When the storm made landfall on Madagascar, sustained winds were around 150 kilometers per hour (90 miles per hour), a marked change from 200 km/hr (125 mph) just twelve hours earlier. While much weakened, Jaya remained a powerful storm. Furthermore, it struck the northern part of Madagascar where a series of other cyclones have also come ashore in recent months. Forecasters were concerned that Jaya might reform after crossing the island and head inland into Mozambique, where residents are recovering from floods caused by recent heavy rains.

You can download a 250-meter-resolution Cyclone Jaya KMZ file for use with Google Earth.