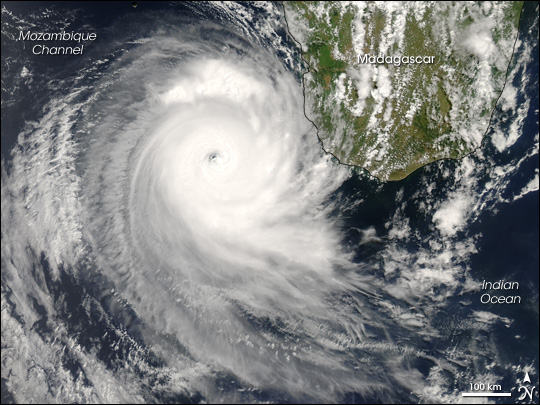 Tropical Cyclone Favio formed in the western Indian Ocean about 1,200 kilometers from Madagascar on February 14, 2007. It gradually moved southwest, passing well offshore of Reunion and Mauritius Islands. By February 20, it was just off the southern shore of Madagascar as a well-formed, mature storm. While the storm system had largely skirted around populated areas to that point, forecasters were concerned about its behavior as it entered the warmer waters of the Mozambique Channel. The storm was forecast to reach Category Four strength before coming ashore and tracking inland through Zimbabwe and Zambia, bringing heavy rains to already flooded areas.

This photo-like image was acquired by the Moderate Resolution Imaging Spectroradiometer (MODIS) on the Aqua satellite on February 20, 2007, at 2:15 p.m. local time (11:15 UTC). The storm was turning north around the southern end of Madagscar, headed for the Mozambique Channel. Favio had the recognizable shape of a southern-hemisphere tropical cyclone, with spiral arms showing its clockwise rotation. The spiral arms are well-defined and tightly wound. A distinct eye at the center of the storm is only partially filled with clouds (a “partially closed” eye). These are all signs of a well-developed and powerful storm, consistent with the cyclone’s strength. According to the University of Hawaii’s Tropical Storm Information Center, Favio had steady winds of around 160 kilometers per hour (100 miles per hour) around the time MODIS made this observation.

You can also download a 250-meter-resolution Cyclone Favio KMZ file for use with Google Earth.