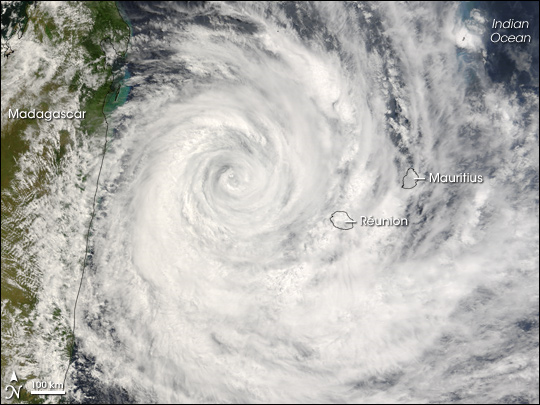 Tropical Cyclone Gamede was in the western Indian Ocean off the shore of Madagascar on February 27, 2007. This powerful storm had been moving southward parallel to the eastern coast of Madagascar for several days at this time, bringing heavy rains and strong surf to Madagascar and the two major Mascarene Islands, Réunion and Mauritius. The storm seemed to be staying away from settled areas, but reports from the Joint Typhoon Warning Center noted strong surf on the coast and island shorelines, as well as heavy rain. This same area was brushed by Cyclone Favio just days before, and it suffered a series of severe storms and cyclones in preceding months. Unlike Favio, Gamede was predicted to continue on its generally southward track and not turn towards mainland Africa.

This photo-like image was acquired by the Moderate Resolution Imaging Spectroradiometer (MODIS) on the Terra satellite on February 27, 2007, at 10:00 a.m. local time (7:00 UTC) as the cyclone was passing between the Mascarene Islands and Madagascar. The storm was a powerful tropical cyclone, with a slightly irregular and cloud-filled eye and far-reaching, tightly wound spiral arms. According to the University of Hawaii’s Tropical Storm Information Center, Cyclone Gamede had sustained winds of 155 kilometers per hour (100 miles per hour) at the time this image was acquired, a small but significant decrease from the previous day. Forecasts at the time called for the storm to avoid landfall, but to continue its grazing path between the Mascarene Islands and Madagascar, with winds continuing to intensify as the storm traveled south over warm waters.

You can also download a 250-meter-resolution Cyclone Gamede KMZ file for use with Google Earth.