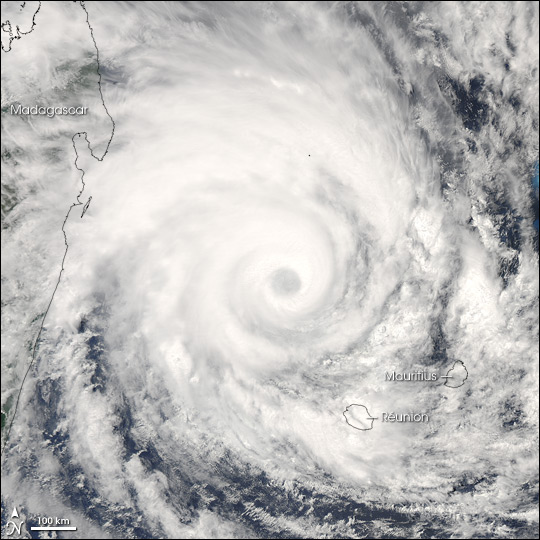 Tropical Cyclone Gamede was sitting in the western Indian Ocean off the shore of Madagascar on February 25, 2007. This powerful storm had been bringing heavy rains and strong surf to eastern Madagascar and the two major Mascarene Islands of Reunion and Mauritius. No settled land areas were experiencing the full brunt of of the sustained winds in the eyewall of the storm (reported at 195 kilometers per hour (120 miles per hour) by the Joint Typhoon Warning Center,) but damaging winds of 60 to 100 km/hr were recorded on the islands. One rainfall gauge measured totals as high as 47 centimeters over the three days Gamede was in the area, according to U.K. Accuweather.

This photo-like image was acquired by the Moderate Resolution Imaging Spectroradiometer (MODIS) on NASA’s Aqua satellite on February 25, 2007, at 11:50 a.m. local time (9:50 UTC), as the storm sat in the region between the small islands and Madagascar. At that time, it appeared the storm would head roughly south, bringing more winds and rain to the Mascarene Islands but not coming ashore onto Madagascar. Since the island had been pummeled by a series of tropical cyclones and storms in preceding months, Gamede was being watched with great care and concern by residents of the islands.

The image provided above is at 1 kilometer resolution, less than the full level of detail possible from the MODIS instrument. The MODIS Rapid Response System provides this image at additional resolutions. Their image collection also includes the distant, but neighboring Cyclone Humba in the central Indian Ocean.