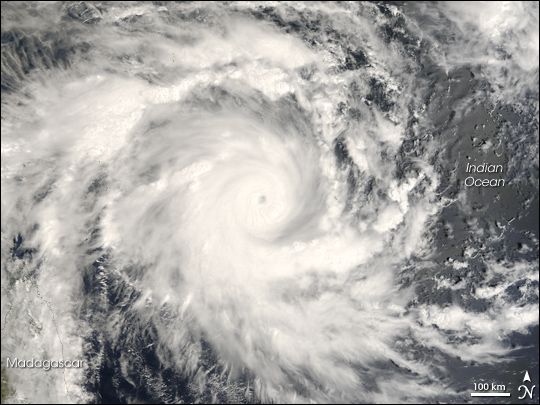 This photo-like image was acquired by the Moderate Resolution Imaging Spectroradiometer (MODIS) on the Terra satellite on December 20, 2006, at 9:35 a.m. local time (6:35 UTC), while the storm’s center was drawing in towards the Seychelles. The island of Madagascar appears to the southwest of the storm (lower-left corner), where the outer rain bands from the storm were coming ashore. Bondo had well-defined, spiral arms of rainclouds and thunderstorms at the time of this image, and a strong and distinct, cloud-filled (or “closed”) eye at its center.

You can also download a 250-meter-resolution Cyclone Bondo KMZ file for use with Google Earth.

Cyclone Gael’s cloud-filled eye was offshore of the east coast of Madagascar on February 6, 2009.