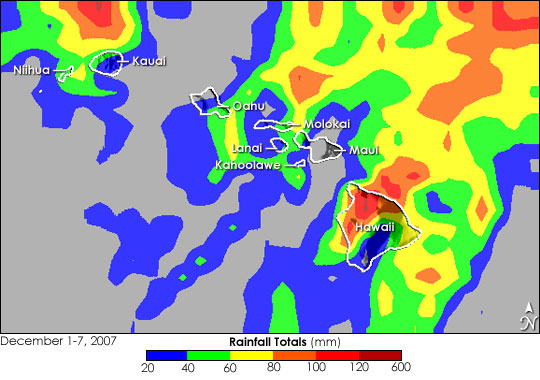 A persistent low-pressure system, known as a “Kona Low,” brought several days of high winds, heavy rains, and even blizzard conditions to parts of the Hawaiian Islands during the first week of December 2007. The storm resulted in flooding, downed power lines, and road closures, said news reports. On Oahu, winds gusted to 110 kilometers per hour (70 miles per hour). On Maui, the road to the summit of Haleakala was closed due to debris brought by heavy rains. Locally, up to 180 millimeters (7 inches) of rain were reported. On the Big Island of Hawaii, in addition to areas of heavy rain of up to 280 mm (11 inches), blizzard warnings were issued for the summits of Mauna Loa and Mauna Kea.

This image, made from data produced by the near-real-time, Multi-satellite Precipitation Analysis (MPA) at NASA’s Goddard Space Flight Center, shows rainfall totals over the Hawaii Islands between December 1 and December 7, 2007. The highest rainfall totals reported by the satellite-based analysis are over the northern part of the island of Hawaii and are on the order of 100 to 120 millimeters (about 4 to 5 inches, shown in red). The locally higher amounts recorded at weather stations on the ground fall below the resolution (level of detail) the satellite can detect. A broad area of rain is also evident downstream (northeast) of the islands.

The storm that produced this rainfall, a Kona Low, was a subtropical cyclone that formed northwest of Hawaii outside the band of warm tropical waters that fuel tropical cyclones. Like its cousin, the tropical cyclone (or hurricane), subtropical cyclones bring strong winds and heavy rains, but the storm system circles a cold center, not a warm center as in a hurricane. Kona Lows originate from a deep kink in the jet stream (a band of strong winds high in the atmosphere that steer weather systems) that sinks south and pinches off, leaving behind a low-pressure circulation that is cut off from the main core of the jet. These cut-off lows can linger for several days.

The Kona Low gets its name from the change in wind direction that occurs when such a storm moves over the islands. Hawaii is dominated by the trade winds that blow in from the northeast. However, the counter-clockwise flow around a Kona low located west of Hawaii results in southwesterly winds over the islands, which is typically the leeward or “kona” side. Kona storms are common between October and April. The storms draw abundant moisture up from the warm tropical waters that surround Hawaii, which can then interact with the topography of the islands to produce heavy rains, as shown here.

The Multi-satellite Precipitation Analysis is based on data collected by the Tropical Rainfall Measuring Mission (TRMM) satellite, which was launched into service in November 1997 with the primary mission of measuring rainfall over the Tropics using a combination of passive microwave and active radar sensors. TRMM is a joint mission between NASA and the Japanese space agency, JAXA.