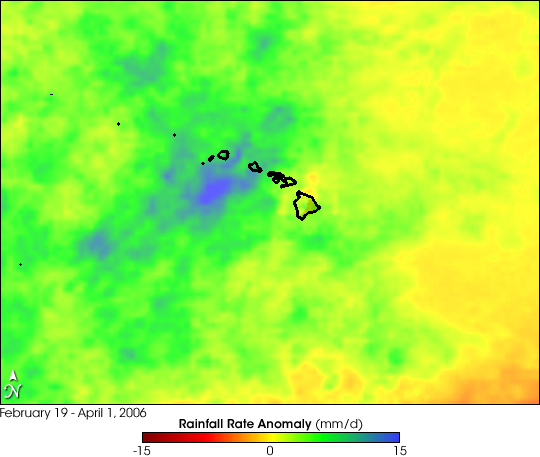 In March 2006, Hawaii suffered heavy rains, flooding, and severe weather. A series of storms (upper-level low pressure centers) north and west of the islands drew warm moist air up from the tropics. When this flow of moist tropical air passed over Hawaii, the island chain’s steep mountains acted as a wringer, releasing torrential rain from the air. As a result, the islands received record-setting rain throughout March 2006. On Kauai, Mount Waialeale (one of the wettest places on earth) set an all-time monthly record of 93.71 inches of rain. Part of the reason for all of the rainfall is the current La Niña. During La Niña conditions, Hawaii is expected to have above-average rainfall totals.

The image above is based on data from the Tropical Rainfall Measuring Mission (TRMM). The TRMM-based, near-real time Multi-satellite Precipitation Analysis (MPA) at the NASA Goddard Space Flight Center monitors rainfall over the global Tropics. The above image shows MPA rainfall anomalies between February 19 and April 1, 2006, for the northern East Pacific. Hawaii and the surrounding area had higher-than-average rainfall (green areas) in general, and the western half of the state received much more rain than normal (blue areas). The large-format image also shows a coherent pattern of above-average rainfall anomalies that extend to the West Coast (green streaks) and culminate in well-above-average rainfall (blue areas) over northern California. These trends are consistent with a La Niña pattern.

The TRMM satellite was launched in November 1997 to measure rainfall over the tropics. It is equipped with both passive and active sensors, including the first precipitation radar in space. TRMM is a joint mission between NASA and the Japanese space agency, JAXA.

Persistent rains through February and March 2006 led to floods and the failure of a dam on the Hawaiian Island of Kauai.