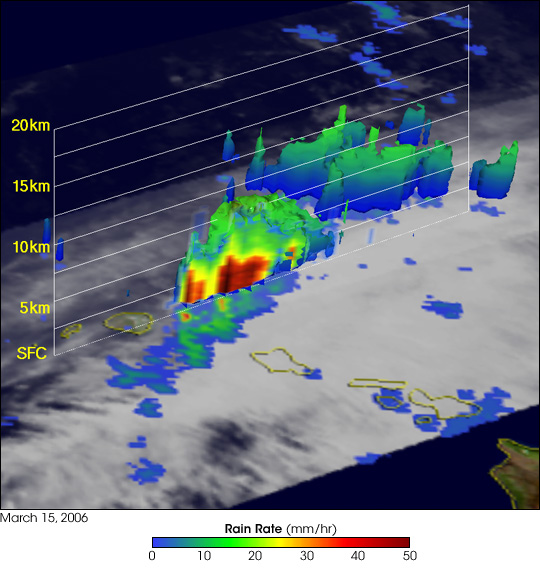 Persistent rains over the past several weeks lead to the failure of an earthen dam on the Hawaiian Island of Kauai, resulting in 2 fatalities. Six people were listed as missing according to news reports from March 21. The rains are a result of a series of low-pressure centers, storm systems that, in the Northern Hemisphere, rotate counterclockwise around a center. The systems formed west of Hawaii and drew moisture from the warm tropical air as they rotated. When the systems crossed the mountain topography of Hawaii, they unleashed torrents of heavy rain. The National Weather Service in Hawaii reported that several locations on the Island of Kauai had rainfall totals in excess of 30 inches for a 3-week period from late February to mid-March. During this period, Mount Waialeale, one of the wettest—if not the wettest—spots on Earth, with an average annual rainfall of nearly 40 feet, received just over 106 inches of rain.

This image shows a snapshot of one of the rain systems that affected the Hawaiian Islands through February and March, as seen by the Tropical Rainfall Measuring Mission satellite (TRMM). The three-dimensional perspective was created using precipitation data collected by the TRMM Precipitation Radar, or PR, the only space-borne precipitation radar of its kind. Like the outer layer of an onion, the outer surface shows the region of light rain along the outer fringes of the storm and reveals the maximum area of the rain. A cut-away view through the storm shows the rain intensity within the system, and the colors at the base of the storm reflect rain rates at the surface over the cloud pattern. Rain rates in the outer swath are from the TRMM Microwave Imager, while those in the center are from the PR. The rain rates are overlaid on infrared data from the TRMM Visible Infrared Scanner.

The three-dimensional perspective is useful because it helps scientists understand the relationship between the structure of the storm and the amount of rain it unleashes. Typically, systems with towering clouds that extend high into the atmosphere produce the most rain. In this case, TRMM shows that although clouds tops in the storm are generally less than eight kilometers high, the storm still produced heavy rain. Intense rain-producing storms such as this develop over the warm waters of the tropics.

Apart from unleashing heavy rain, the storm system also caused flooding because of the orientation and movement of the showers within the rain-producing section of the storm, the rain band seen in the flat section of the image. Although this particular rain band is located over the channel between the islands of Kauai on the left and Oahu on the right, the image shows that these rain bands can be rather long. As the rain showers are drawn northeastward (along the axis of the rain band) over a particular location, shower after shower passes over the same spot and can lead to large rainfall totals, an effect known as “training.” This effect can be especially pronounced when amplified by the topography of an island.

TRMM is a joint mission between NASA and the Japanese space agency, JAXA, and was launched into service in November of 1997 to measure rainfall over the Tropics.

Persistent rains through February and March 2006 led to floods and the failure of a dam on the Hawaiian Island of Kauai.