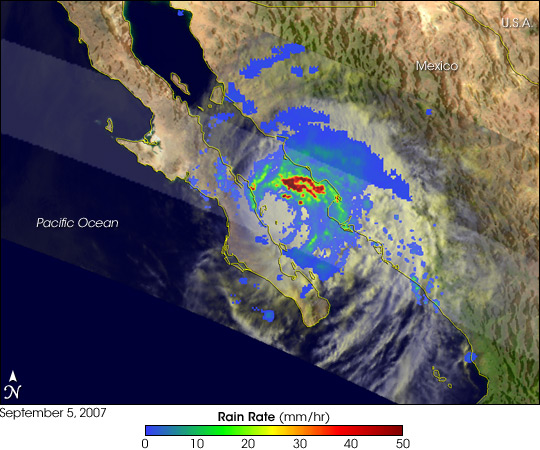 Although not a very powerful storm, Hurricane Henriette was responsible for seven fatalities along Mexico’s Pacific coast as of September 6, 2007, said news reports. Henriette struck hardest in the resort town of Acapulco. Though the storm never passed closer than 70 miles to the town, heavy rains along the coast saturated the ground, leading to mudslides. These slides were the leading cause of fatalities.

This image shows Hurricane Henriette as a Category 1 hurricane, as seen by the Tropical Rainfall Measuring Mission (TRMM) satellite at 8:50 a.m. local time (14:50 UTC) on September 5. At that time, the storm was moving north-northwest over the Gulf of California after it had made its initial landfall on the Baja Peninsula. The image shows the horizontal pattern of rain intensity within the storm, with the heaviest rain in red and the lightest rain in blue. A break in the circular rainfall field in the southwest corner of the storm reveals a large, ragged eye. A large eye only partially surrounded by rain is a hallmark of a system that is decaying or has been weakened. In this case, Henriette was likely breaking up after its interaction with land. Most of the rain is north and east of the center, with bands of heavy rain located just offshore of mainland Mexico (dark red areas). Henriette was expected to dump several inches of rain over mainland Mexico, and possibly bring some rain to the southwestern regions of the United States.

The TRMM satellite was placed into service in November 1997. From its low-earth orbit, TRMM provides valuable images and information on storm systems around the tropics using a combination of passive microwave and active radar sensors, including the first precipitation radar in space. In this image, the rain rates in the center of the swath are from the TRMM Precipitation Radar, and those in the outer swath come from the TRMM Microwave Imager. The rain rates are overlaid on infrared data from the TRMM Visible Infrared Scanner. TRMM is a joint mission between NASA and the Japanese space agency, JAXA.