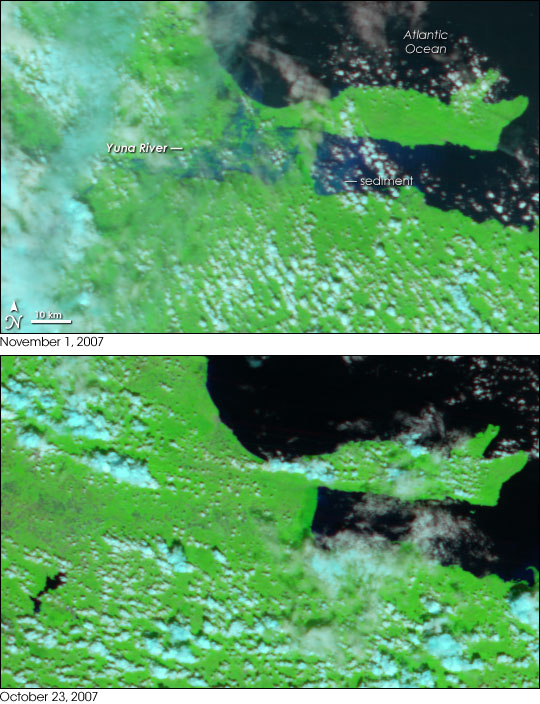 Tropical Storm Noel left floods and landslides in its wake after crossing Hispaniola, the island shared by the Dominican Republic and Haiti, on October 28, 2007. As of November 2, 79 people had been reported dead and 65,000 displaced in the Dominican Republic, said the United Nations Office for the Coordination of Humanitarian Affairs.

The Moderate Resolution Imaging Spectroradiometer (MODIS) on NASA’s Terra satellite captured the top image of floods near the northern shore of the Dominican Republic on November 1. The image was made with a combination of infrared and visible light so that water is black, plant-covered land is bright green, and clouds are pale blue and white. Run-off from the floods filled the Yuna River with sediment, coloring the water blue. The sediment also colors the Atlantic Ocean near the mouth of the river. As the lower image shows, the Yuna River is not visible in MODIS imagery under normal conditions, but in the November 1 image, the river has swollen enough to be clearly seen beneath a thin veil of clouds. The flooded delta covers several kilometers.

You can download a 250-meter-resolution KMZ file of the flooding suitable for use with Google Earth.

Tropical Storm Noel left floods and landslides in its wake after crossing Hispaniola, the island shared by the Dominican Republic and Haiti, on October 28, 2007.