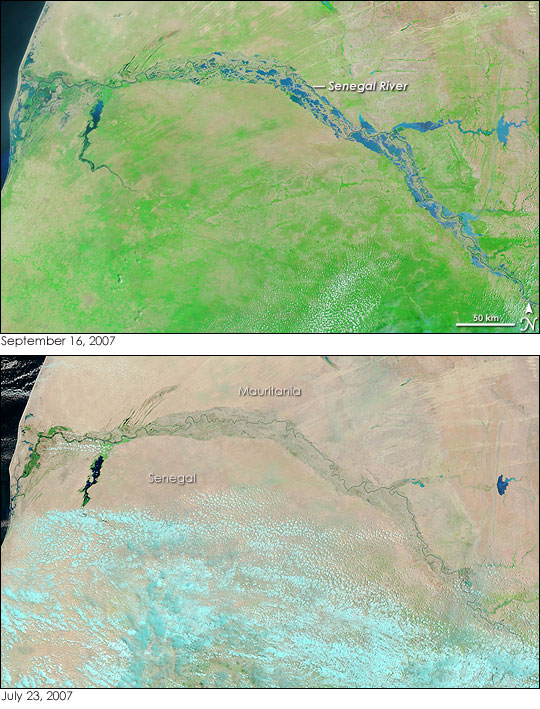 The season’s rain came late to parts of the African Sahel, but the tardy downpour was heavy and steady throughout August and into September 2007. Though good for crops, the rains swelled rivers from the West African Atlantic coastline to the Horn of Africa abutting the Indian Ocean. As of September 17, the floods had impacted more than a million people across 17 countries, reported BBC News. Among the countries affected by flooding were Senegal and Mauritania. The border between the two countries is defined by the Senegal River, which was flooded on September 16, when the Moderate Resolution Imaging Spectroradiometer (MODIS) on NASA’s Terra satellite captured the top image. The lower image shows the river on July 23, 2007, before the steady rains started.

These false-color images were made with a combination of visible and infrared light so that water is black or, when colored by mud, blue. The Senegal River painted a thin blue line across the sparsely vegetated, tan-pink landscape on July 23. By September, floods pooled on either side of the river. The river’s tributaries in Mauritania were swollen, as was the Senegal River near its mouth. Additional proof of recent rain can be seen in the changing color of the surrounding land, which was colored green with new plants in September. A harbinger of the coming rains, turquoise and white clouds cover the southern half of the scene on July 23.

Floods swelled rivers and saturated cropland through much of West Africa under the steady onslaught of wet-season rains in August and September 2007.