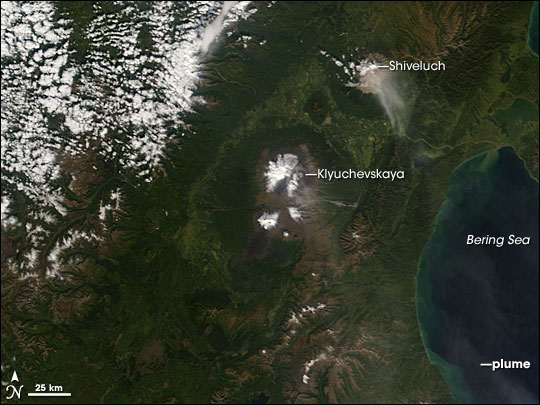 Shiveluch and Klyuchevskaya Volcanoes on Russia’s Kamchatka Peninsula released simultaneous plumes on September 11, 2006, as the Moderate Resolution Imaging Spectroradiometer (MODIS) on NASA’s Aqua satellite passed overhead. In this image, Shiveluch’s plume is thicker and more noticeable, but Klyuchevskaya’s plume is also discernible. Both plumes are especially easy to detect over the dark blue waters of the Bering Sea. The pale color of both plumes suggests that water vapor predominates, although the plumes likely also contain some volcanic ash.

Shiveluch (sometimes spelled Sheveluch) is a stratovolcano—a steep-sloped volcano made from alternating layers of solidified ash, hardened lava, and volcanic rocks. One of Kamchatka’s largest volcanoes, it has a summit elevation of 3,283 meters (10,771 feet). Shiveluch is also one of Kamchatka’s most active volcanoes, with an estimated 60 substantial eruptions in the past 10,000 years.

Klyuchevskaya (sometimes spelled Klyuchevskoy or Kliuchevskoi) is also a stratovolcano, and the most active volcano on the Kamchatka Peninsula. It is also the peninsula’s tallest, with a summit elevation of 4,835 meters (15,863 feet). Since its formation some 6,000 years ago, Klyuchevskaya has seen few periods of inactivity, and the volcano is estimated to have experienced more than 100 flank eruptions in the past 3,000 years.

Both Shiveluch and Klyuchevskaya are part of the Pacific “Ring of Fire.” Kamchatka experiences regular seismic activity as the Pacific Plate slides below other tectonic plates in the Earth’s crust.