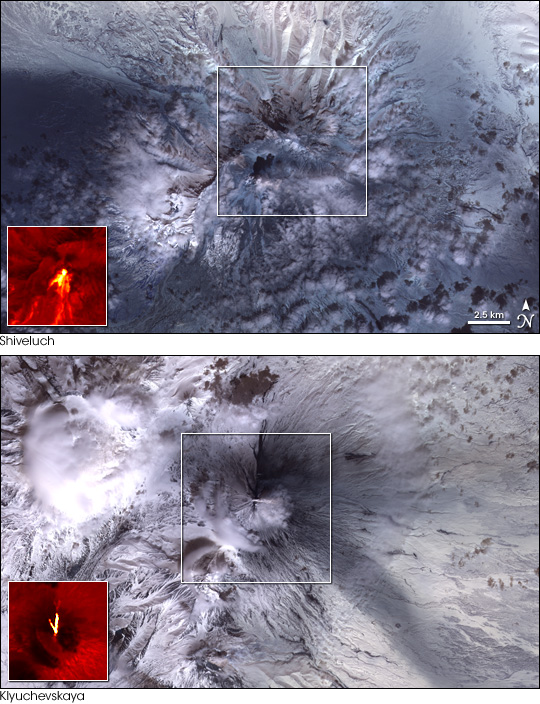 A distance of about 80 kilometers (50 miles) separates Shiveluch and Klyuchevskaya Volcanoes on Russia’s Kamchatka Peninsula. Despite this distance, however, the two acted in unison on April 26, 2007, when the Advanced Spaceborne Thermal Emission and Reflection Radiometer (ASTER) on NASA’s Terra satellite caught them both erupting simultaneously.

ASTER “sees” a slightly different portion of the light spectrum than human eyes. Besides a portion of visible light, ASTER detects thermal energy, meaning it can detect volcanic activity invisible to human eyes. Inset in each image above is a thermal infrared picture of the volcano’s summit. In these insets, dark red shows where temperatures are coolest, and yellowish-white shows where temperatures are hottest, heated by molten lava. Both insets show activity at the crater. In the case of Klyuchevskaya, some activity at the crater is also visible in the larger image.

In the larger images, the landscapes around the volcanoes appear in varying shades of blue-gray. Dark areas on the snow surface are likely stains left over from previous eruptions of volcanic ash. Overhead, clouds dot the sky, casting their shadows on the snow, especially southeast of Shiveluch and northeast of Klyuchevskaya. To the northwest of Klyuchevskaya is a large bank of clouds, appearing as a brighter white than the snow surface.

Shiveluch (sometimes spelled Sheveluch) and Klyuchevskaya (sometimes spelled Klyuchevskoy or Kliuchevskoi) are both stratovolcanoes composed of alternating layers of hardened lava, solidified ash, and rocks from earlier eruptions. Both volcanoes rank among Kamchatka’s most active. Because Kamchatka is part of the Pacific “Ring of Fire,” the peninsula experiences regular seismic activity as the Pacific Plate slides below other tectonic plates in the Earth’s crust. Large-scale plate tectonic activity causing simultaneous volcanic eruptions in Kamchatka is not uncommon.

You can download a 15-meter-resolution Kamchatka KMZ file which includes Shiveluch and Klyuchevskaya for use with Google Earth.