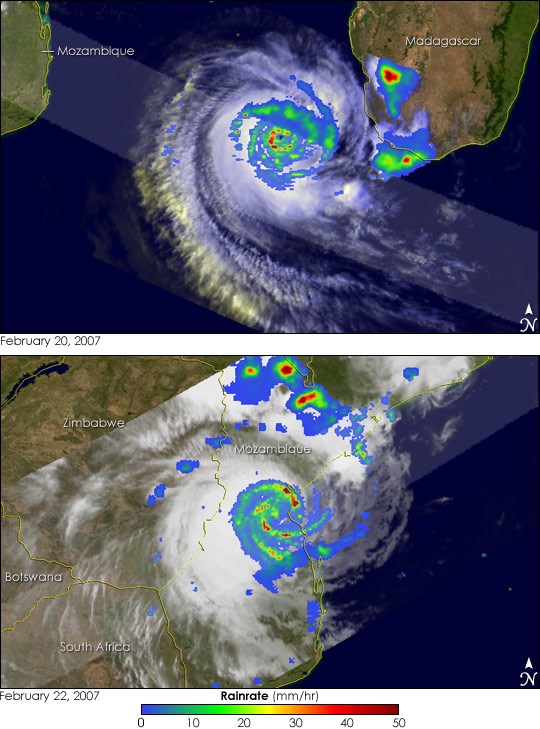 These images track Cyclone Favio as it brushed the southern tip of the island of Madagascar, and then continued on to Mozambique. The storm came ashore over southern Mozambique on February 22, 2007, as a strong Category 3 storm. As of February 28, news reports had attributed four fatalities to the storm in Vilanculos, a coastal tourist town where the storm made landfall.

Favio began as a tropical disturbance on February 11, 2007, in the central Indian Ocean south of Diego Garcia in the Chagos Archipelago. Slow to intensify, the system finally became a tropical storm three days later on February 14. Favio remained a tropical storm for the next several days as it made its way through the west-central Indian Ocean east of Mauritius, and finally began to intensify as it neared Madagascar. It became a Category 1 cyclone on February 19. As it rounded the southern tip of Madagascar, Favio continued to intensify and reached Category 3 intensity on February 20. The cyclone then took a more northwesterly path as it entered the Mozambique Channel.

These images of the storm were taken by the Tropical Rainfall Measuring Mission (TRMM) satellite on February 20 and February 22, 2007. TRMM was placed into its low-earth orbit in November 1997 to measure rainfall from space; however, it has also served as a valuable platform for monitoring tropical cyclones, especially over remote parts of the open ocean. The images show the rainfall intensity. Rain rates in the center of the swath are from the TRMM Precipitation Radar, while those in the outer portion are from the TRMM Microwave Imager. The rain rates are overlaid on infrared data from the TRMM Visible Infrared Scanner. TRMM shows that Favio was a well-organized storm on February 20 (top) with a central eye (dark blue area in the center) surrounded by an eyewall containing heavy rainfall (dark red areas). The storm is also very symmetric with good “banding” in the rain field, demonstrated by the tightly curved bands of moderate rain (green areas) spiraling in towards the center. These features are the hallmarks of a mature, intense tropical cyclone. Though the cyclone did not strike Madagascar, the red areas indicate that it dumped heavy rains on the southern tip of the island.

As Favio crossed the Mozambique Channel it reached a peak intensity of 232 kilometers per hour (144 miles per hour, or 125 knots) on the early morning of February 22, making it a Category 4 storm. The cyclone then weakened slightly before slamming into southern Mozambique with sustained winds estimated at 204 km/hr (127 mph, 110 knots). TRMM took the lower image on February 22 soon after Favio made landfall in Mozambique. The image shows that although the eye was not as well defined as in the earlier image, the circulation is still robust; the spiral rainbands (green arcs) are still well defined. Maximum sustained winds were still estimated to be 167 km/hr (114 mph, 90 knots) at the time of this image but quickly diminished thereafter. The bands of heavy rain shown in this image triggered floods along rivers in Central Mozambique. Unfortunately for Mozambique, the storm-induced floods follow additional serious flooding on the Zambezi River to the north.