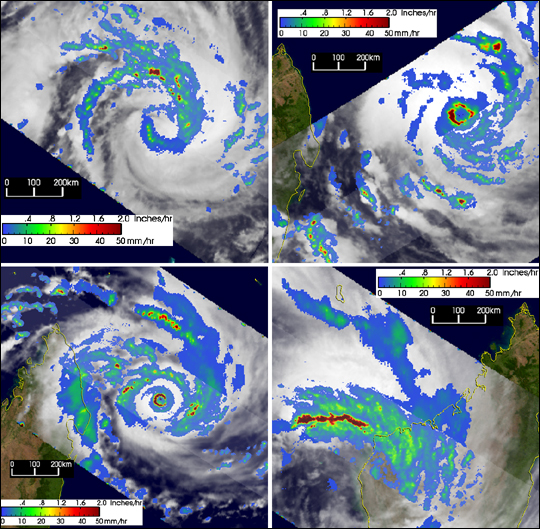 The island of Madagascar, which was hit by Cyclone Elita back on the 29th of January, recently suffered a direct hit from Gafilo, a far more powerful storm rated as an intense Category 5 Cyclone at the time it made landfall on the island's northeast coastline. So far Gafilo has left 7 dead, 18 missing and up to 100,000 homeless on Madagascar. Gafilo began as a tropical depression back on the 29th of February 2004 in the central Indian Ocean south of Deigo Garcia in the Chagos Archipelago. Two days later on the 2nd of March, it became a tropical storm and continued moving west. Gafilo strengthened into a Category 1 cyclone the next day on the 3rd, and March 4th saw Gafilo continuing to intensify with winds increasing to 85 knots (98 mph) as estimated by the Joint Typhoon Warning Center. On the 5th, Gafilo began a cycle of rapid deepening with winds increasing to 125 knots (144 mph) making it a major Category 4 cyclone. It was now moving west-southwest headed straight for Madagascar. The next day, on the 6th of March 2004, Gafilo struck the northeast coast of Madagascar near to the town of Antalaha as a Category 5 cyclone, the highest possible rating, its sustained winds having further increased to an estimated 140 knots (161 mph). Ninety-five percent of Antalaha was reported destroyed.

The Tropical Rainfall Measuring Mission (TRMM) satellite captured numerous, impressive images of Cyclone Gafilo covering most of it's life cycle as it traversed the western Indian Ocean. The first image (top left) was taken at 8:15 UTC on 4 March 2004. It shows the horizontal distribution of rain rates as seen from above by the TRMM satellite. Rain rates in the center swath are from the TRMM Precipitation Radar (PR), the first and only precipitation radar in space, and rain rates in the outer swath are from the TRMM Microwave Imager (TMI). The rain rates are overlaid on infrared (IR) data from the TRMM Visible Infrared Scanner (VIRS). In this first image, TRMM shows Gafilo to have a large, closed eye but only weak (blues) to moderate (green areas) rain rates immediately surround the center. A large rainband with some embedded heavier convection (darker red areas) wraps in towards the eye from the storm's northwest quadrant. At the time, Gafilo was already rated a Category 1 cyclone with winds estimated at 65 knots (75 mph). The next image (top right) taken at 17:10 UTC on March 5 reveals a very different looking Gafilo. The eye has become smaller, and the surrounding eyewall is now composed almost entirely of heavy (reds) to intense (darker reds) rain rates of up to 2-inches per hour. Tropical cyclones act like large heat engines. Their fuel comes from the transformation of water vapor in the atmosphere. As water vapor condenses into the tiny cloud droplets that eventually form the precipitation, heat is released. This heat, known as latent heat, is what drives the storm's circulation. In general, the more heating that occurs, the more intense the storm will become. This heating is most effective in driving the storm if it is occurs near its center as TRMM shows is the case shown here with Gafilo. At this time, Gafilo was a powerful Category 4 storm with winds estimated at 125 knots (144 mph).

The third (bottom left) image was taken at 8:02 UTC March 6th as Gafilo was approaching the coast of Madagascar and shows a tropical cyclone at its most mature, intense stage. The storm now has a very tight, very small eye with a nearly perfectly symmetrical eyewall containing a near-uniform concentric ring of intense rain rates (dark reds). The storm is now at Category 5, and the winds are at 140 knots (161 mph). The final image (bottom right) shows Gafilo in the Mozambique Channel after the storm had crossed the entire northern half of Madagascar. Taken at 7:47 UTC on the 8th, with the circulation having been disrupted by land and topography and its supply of water vapor essentially cutoff, the eye is now totally gone with no visible eyewall present. A large rainband with a broad area of intense (dark reds) to moderate (green areas) rain remains, extending from the central part of the Mozambique Channel eastward into western Madagascar north of the storm's center. Gafilo had now been downgraded to a tropical storm with remaining winds estimated at 55 knots (63 mph).