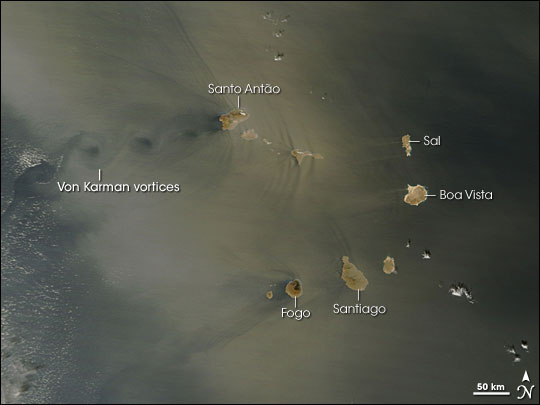 A dust storm blowing off the west coast of Africa on January 1, 2007, reached Cape Verde the same day. The Moderate Resolution Imaging Spectroradiometer (MODIS) on NASA’s Terra satellite took this picture on January 1. In this image, the Saharan dust adds a tan tint to the ocean. The westward-blowing dust forms Von Karman vortices behind Santo Antão Island. Recognizable by their swirling patterns, these vortices often form when air moves over an island or other obstacle.

The Sahara Desert regularly dusts the islands of Cape Verde, but in this image, a small portion of the dust appears to originate from the islands themselves. A close look at the image reveals diminutive plumes blowing westward off the islands of Sal and Boa Vista.