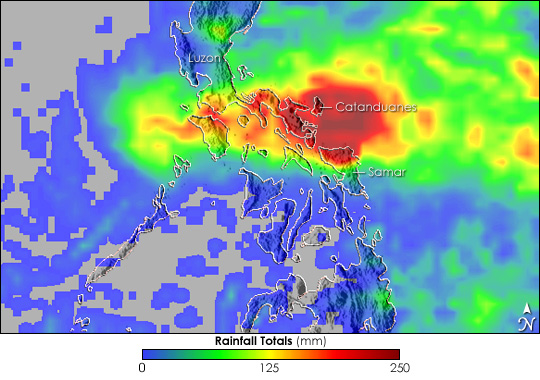 In what turned out to be a deadly combination, torrential rains brought on by the passage of Super Typhoon Durian and volcanic ash leftover from recent eruptions on the Mayon Volcano resulted in massive mudslides in the Central Philippines. As of December 4, 2006, at least 425 people had been confirmed dead, and nearly 600 more were still missing. Super Typhoon Durian (known as “Reming” in the Philippines) made landfall in the Central Philippines on November 30, 2006, with reported wind gusts of up to 140 mph. The center crossed over Albay province in the southern part of the main northern Philippines island, Luzon. Though winds were strong, it was the accompanying heavy rainfall that turned out to be a disaster for the region.

Rainfall totals for November 24 through December 1, 2006, are shown in this image. Rainfall totals exceeding 200 millimeters (about 8 inches) are shown in red and extend from the western Philippine Sea across southern sections of Luzon, Catanduanes Island (northwesternmost island shown), and northern Samar. Locally up to 460 mm (about 18 inches) of rain were reported in Albay province. Some of the heaviest rain fell on the 2,462-meter-high Mayon volcano, the Philippines’ most active volcano. An eruption earlier in the year left the steep slopes covered with a large amount of volcanic ash. It was this combination of ash and the torrential rains from Durian that led to the massive mudslides that buried entire villages in the region.

The rainfall totals shown here are from the near-real-time, Multi- satellite Precipitation Analysis (MPA), which is based in part on measurements from the Tropical Rainfall Measuring Mission satellite (TRMM). TRMM was placed into low-Earth orbit in November 1997 to measure rainfall over the global Tropics using a combination of passive microwave and active radar sensors.