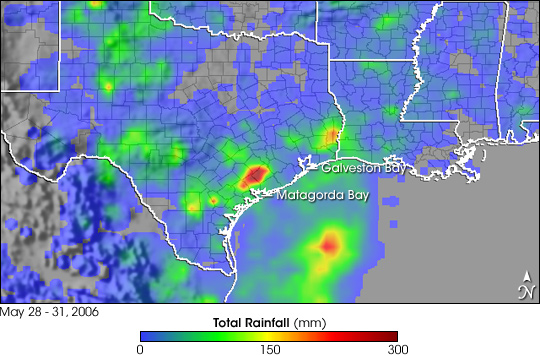 Strong southerly winds pumped moist air up from the Gulf of Mexico and across southeastern Texas over the Memorial Day weekend at the end of May 2006. The abundant moisture triggered and sustained thunderstorms over the coastal areas of Texas between May 28 and May 31, 2006. Up to 16 inches of rain were reported in just 24 hours in Chambers County, Texas, east of Galveston Bay, and nearly 12 inches of rain fell in Harris County just outside of Houston.

Patches of heavy rain in Southern Texas are clear in this image of satellite-based rainfall totals for May 28-31, 2006. The highest totals (shown in red) occur just inland from the coast near Matagorda Bay along the central part of the Texas Gulf coast where rainfall totals exceed 10 inches (darkest red area). Another area of heavy rain is visible near the border with Louisiana just north of Beaumont, Texas, where amounts are on the order of 7 inches (lighter red area). The totals reported near Galveston Bay and Houston may have been too small in scale (occurred in a very localized area) or occurred over too a brief period to be captured by the satellite, as the image shows relatively low totals in those areas.

The image was created from a near-real time, Multi-satellite Precipitation Analysis (MPA) at the NASA Goddard Space Flight Center. The MPA is based on data from the Tropical Rainfall Measuring Mission satellite (known as TRMM,) which was placed into service in November 1997. From its low-Earth orbit, TRMM has been measuring rainfall over the global Tropics using a combination of passive microwave and active radar sensors. TRMM is a joint mission between NASA and the Japanese space agency, JAXA.