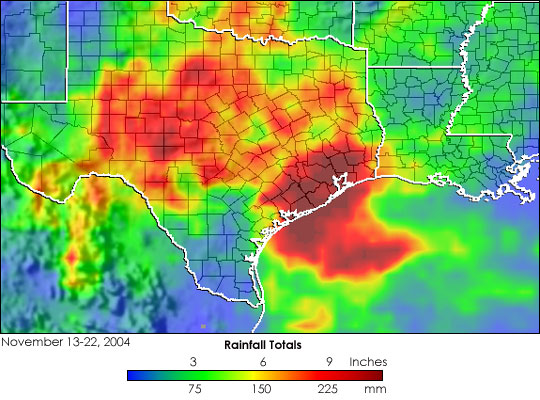 Two consecutive storm systems brought widespread flooding to most of Central and coastal Texas in mid-November. As surface high pressure over the southeast US pumped warm, moist air up from the Gulf of Mexico, an upper-level low centered over far west Texas provided the trigger for numerous showers and thunderstorms across the state. The hardest hit areas were central Texas including the hill country and the gulf coast between Corpus Christi and Galveston. The town of El Campo southwest of Houston reported over 15 inches of rain. The second round of flooding rains was brought about by a stationary frontal boundary that extended from south-central Texas eastward along the gulf coast into the panhandle of Florida. The front provided the focus for heavy storms that were a result of a highly unstable air mass over the northern Gulf of Mexico. This time the heaviest rains occurred over eastern Texas and the northern part of the gulf coast, including areas already flooded from the previous storm system.

The Tropical Rainfall Measuring Mission satellite uses both passive and active sensors to measure rainfall from space. The TRMM-based, near-real time Multi-satellite Precipitation Analysis (MPA) at the NASA Goddard Space Flight Center monitors rainfall over the global tropics. MPA rainfall totals are shown for November 13-22, 2004. A widespread area of 6 to 10 inches (yellow and red areas) covers central and west central Texas. Most of this rainfall is attributed to the first storm system and fell on the 16th and 17th of November. The large dark red area that extends along the Texas coast indicates rainfall totals on the order of 12 inches or more. These totals are due to the combined effects of both storm systems. The bulk of the rain that was associated with the second storm system in the form of a stationary front fell between the 20 and 22nd of November. As of November 22, one person had been reported lost as a result of the flooding.