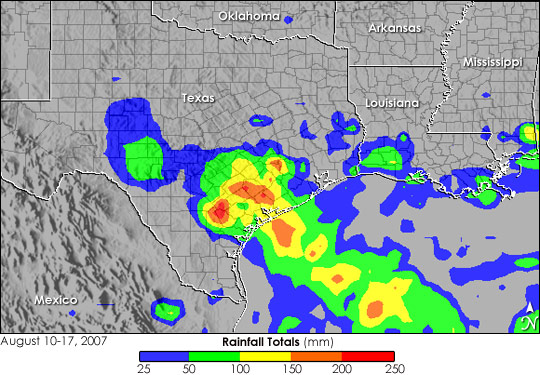 The summer of 2007 brought record rainfall and flooding across parts of Texas. Tropical Storm Erin, which made landfall just north of Corpus Christi on August 16, added even more heavy rain to the region. Corpus Christi had already received over 18 inches of rain in July, a record for the month.

Erin began as a tropical depression on the night of August 14, 2007, (local time) in the central Gulf of Mexico. The system had little time to develop as it moved northwestward towards Texas. It made landfall as a weak tropical storm early on the morning of August 16. However, even weak systems are capable of producing heavy rain and flooding, and this image shows just how much rain Erin brought to Texas.

The image comes from the near-real-time, Multi-satellite Precipitation Analysis (MPA) project at NASA’s Goddard Space Flight Center. The MPA is based on measurements taken by the Tropical Rainfall Measuring Mission (TRMM) satellite. The image shows rainfall totals from August 10 through August 17 for the northwest Gulf Coast and the surrounding region. A band of heavy rain lies directly along Erin’s path. The highest rainfall totals for the period (shown in red and orange) are on the order of 150 to 200 millimeters (around 6 to 8 inches) over the central Texas Gulf Coast. One- to two-inch amounts (blue and green areas) extend northwestward into central West Texas in association with the remnants of Erin. As of August 17, news reports blamed up to 7 deaths on Erin’s passage.

Though Tropical Storm Erin was a weak storm when it came ashore over the Texas Gulf Coast, it brought heavy rain to the region.