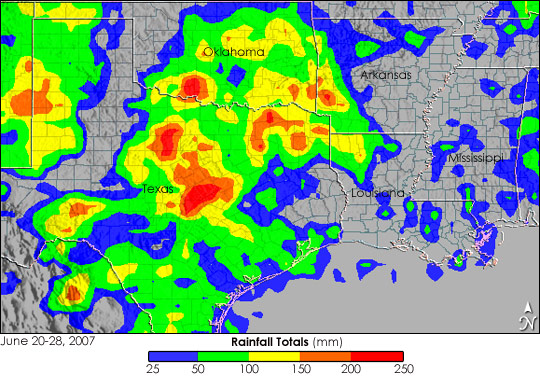 June 2007 was exceptionally wet for the Southern Plains of the United States because a stagnant weather pattern focused moisture and storms over Texas and Oklahoma. The latest round of heavy storms dumped up to 460 millimeters (18 inches) of rain in parts of central Texas on the night of Tuesday, June 26, said news reports. For Austin, the state’s capital, more than 30 inches of rain has fallen since January, making 2007 the wettest year on record so far according to local news reports.

This image shows rainfall totals from the near-real-time, Multi-satellite Precipitation Analysis (MPA), which is based on rainfall data collected by the Tropical Rainfall Measuring Mission TRMM) satellite. The totals shown here indicate how much rain fell between June 20 and June 28, 2007. Splotches of red over central Texas and southern Oklahoma indicate where the MPA tallied up to 200 millimeters (8 inches) of rain. A broad area of at least 50 mm (about 2 inches) of rainfall covers almost all of Texas and Oklahoma. These totals fall short of totals reported on the ground because the satellites used in the MPA can’t see areas of localized heavy rain. These satellites “zoom in” to approximately 30 kilometers (20 miles), and so miss smaller areas of intense rain.

Floods washed over parts of northern Texas and Oklahoma when heavy rain inundated the region in June 2007.