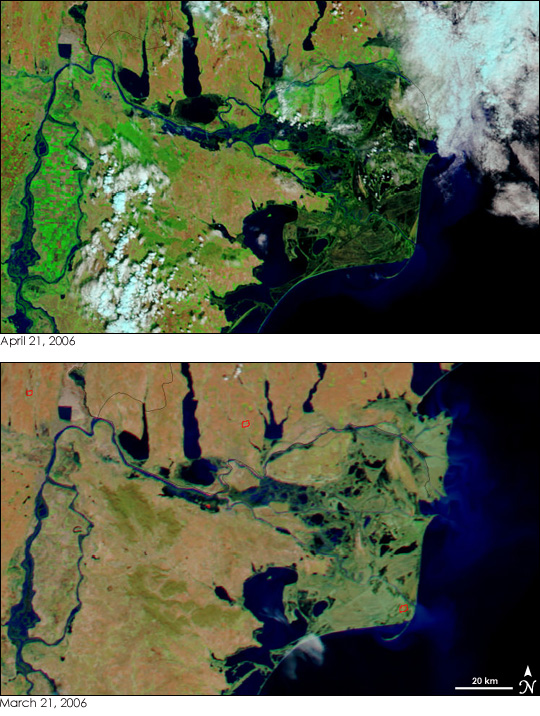 Spring 2006 brought raging floods to Central Europe, and perhaps nowhere are the floods more apparent than in the wide delta of the Danube River. When the Moderate Resolution Imaging Spectroradiometer (MODIS) on NASA’s Terra satellite captured the top image on April 21, 2006, the delta was almost entirely covered with water, which appears black and dark blue in this false-color image. Though much of the region is wetland, some villages in the delta were threatened by the flood. To allow the water to drain into the Black Sea (image right) more quickly, Romanian officials broke a hole in a major dike designed to keep water in the wetlands during drought, Reuters reported. The image was acquired on the morning of the same day the dike was breached, so the effects of the break are probably not yet visible.

The lower image shows the delta on March 21, before the suffusion of flood water. Only a series of ponds and the pale green tint of natural vegetation hint that the delta is a wetland. It is, in fact, Europe’s largest and best-preserved delta. Home to more than 300 bird species, the delta is a World Heritage Site. In the March image, a few fires have been marked in red.

Clouds are light blue and white in these images, vegetation is green, and bare earth is tan and pink. Daily images of the region are available from the MODIS Rapid Response Team in a variety of resolutions.