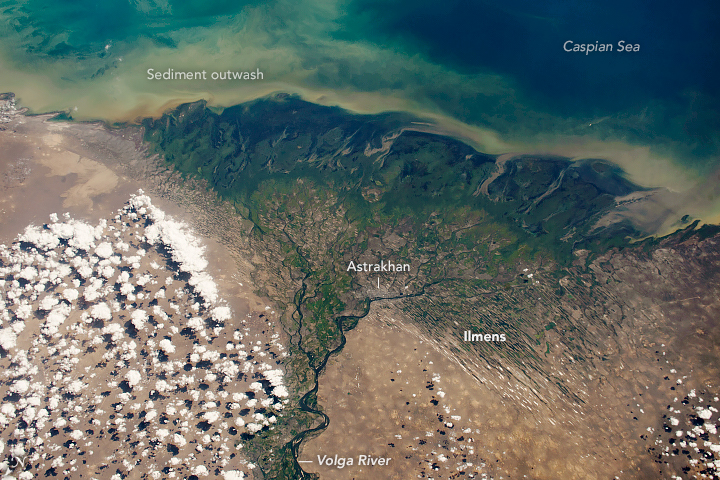 An astronaut aboard the International Space Station shot this photograph of the Volga River Delta, which stretches 160 kilometers (100 miles) across Russia’s Astrakhan Oblast. It is Europe’s largest river delta, situated where the Volga pours its fresh water and sediment into the northwest sector of the Caspian Sea.

Over the past century, the Volga Delta has grown from 3,222 square kilometers (1,244 square miles) in 1880 to 27,224 square kilometers (10,511 square miles) today. This significant growth is due both to sea level changes in the Caspian and the broad, gentle slope of the delta. When water from the river enters the delta, it gets split up into hundreds of waterways, creating one of the world’s most complicated hydrographic networks. The upper delta is home to several cities and towns, including the city of Astrakhan, which lies 100 kilometers (60 miles) from the shore.

The delta is composed of three distinct zones. The first and most prominent includes the higher areas of the delta, which are dominated by linear mounds and basins known as “ilmens.” These parallel mounds range from 400 meters (1,300 feet) to 10 kilometers (6 miles) long and stand as much as 8 meters (26 feet) high. They run east to west through the delta and are composed of clay-rich sands.

The second zone of the deltat has very low relief and is the site of active and abandoned water channels. The third zone is the submarine portion of the delta and is composed of a broad platform that extends 30 to 60 kilometers (20-40 miles) offshore.

The Volga Delta is home to myriad wildlife species protected in the Astrakhan State Nature Reserve, established in 1919. There are 283 recorded species of birds (155 of which migrate to the delta from March to November) and at least 50 different species of fish. The reserve was dedicated as a Wetlands Site of International Importance in 1976 and added to the World Network of Biosphere Reserves in 1984.

Astronaut photograph ISS048-E-63048 was acquired on August 21, 2016, with a Nikon D4 digital camera using a 78 millimeter lens and is provided by the ISS Crew Earth Observations Facility and the Earth Science and Remote Sensing Unit, Johnson Space Center. The image was taken by a member of the Expedition 48 crew. The image has been cropped and enhanced to improve contrast, and lens artifacts have been removed. The International Space Station Program supports the laboratory as part of the ISS National Lab to help astronauts take pictures of Earth that will be of the greatest value to scientists and the public, and to make those images freely available on the Internet. Additional images taken by astronauts and cosmonauts can be viewed at the NASA/JSC Gateway to Astronaut Photography of Earth. Caption by Sarah Deitrick, Jacobs, JETS Contract at NASA-JSC. 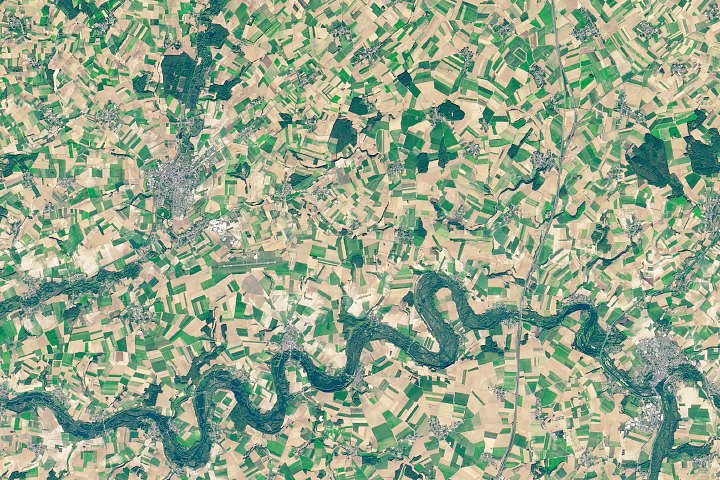