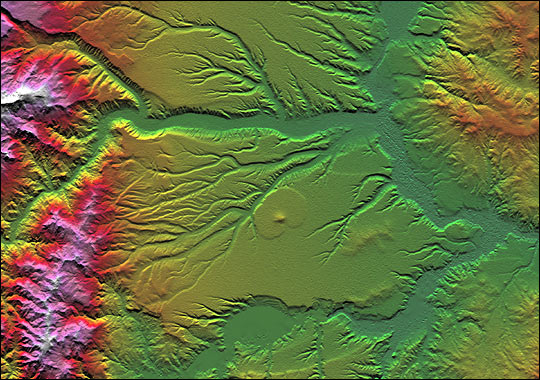 Volcanism and erosion are prominently seen in this view of the eastern flank of the Andes Mountains taken by Shuttle Radar Topography Mission (SRTM). The area is southeast of San Martin de Los Andes, Argentina. Eroded peaks up to 2,210-meter-high (7,260-foot) are seen on the west (left), but much of the scene consists of lava plateaus that slope gently eastward. These lava flows were most likely derived from volcanic sources in the high mountains. However, younger and more localized volcanic activity is evident in the topographic data as a cone surrounding oval-shaped flow near the center of the scene.

The plateaus are extensively eroded by the Rio Limay (bottom of the image) and the Rio Collon Cura and its tributaries (upper half). The larger stream channels have reached a stable level and are now cutting broad valleys. Few terraces between the levels of the high plateaus and lower valleys (bottom center and upper right of the volcanic cone) indicate that stream erosion had once temporarily reached a higher stable level before eroding down to its current level. In general, depositional surfaces like lava flows are progressively younger with increasing elevation, while erosional surfaces are progressively younger with decreasing elevation.

Two visualization methods were combined to produce this image: shading and color coding of topographic height.The shade image was derived by computing topographic slope in the north-south direction.Northern slopes appear bright and southern slopes appear dark, as would be the case at noon at this latitude in the southern hemisphere. Color coding is directly related to topographic height, with green at the lower elevations, rising through yellow, red and magenta to white at the highest elevations.