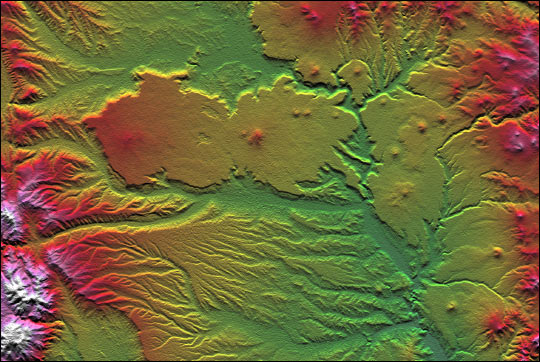 The interplay of volcanism, stream erosion and landslides is evident in this Shuttle Radar Topography Mission view of the eastern flank of the Andes Mountains, southeast of San Carlos de Bariloche, Argentina. Older lava flows emanating from the Andes once covered much of this area. Younger, local volcanoes (seen here as small peaks) then covered parts of the area with fresh, erosion resistant flows (seen here as very smooth surfaces). Subsequent erosion has created fine patterns on the older surfaces (bottom of the image) and bolder, irregular patterns through and around the younger surfaces (upper center and right center). Meanwhile, where a large stream immediately borders the resistant plateau (center of the image), lateral erosion has undercut the resistant plateau causing slivers of it to fall into the stream channel. This scene well illustrates how topographic data alone can reveal some aspects of recent geologic history.