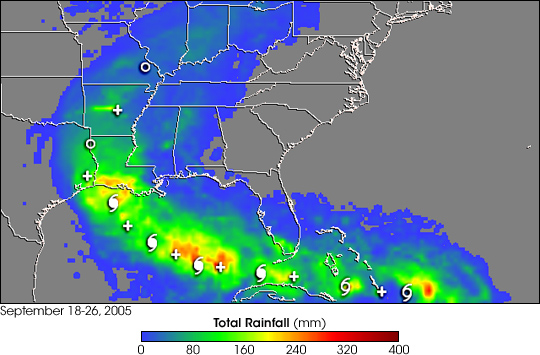 After forming east of the Turks and Caicos, Rita moved west and sideswiped the Florida Keys before entering the Gulf of Mexico where it strengthend into the 3rd most powerful hurricane on record (in terms of central air pressure). Rita eventually made landfall near the Texas-Louisiana border as a Category 3 storm. After making landfall, Rita weakened into a tropical depression and moved northeastward through central Arkansas and into southeast Missouri.

The image about shows the Multi-satellite Precipitation Analysis (MPA) rainfall totals due solely to Rita for the period September 18-26, 2005, with storm symbols marking the storm track. The highest rainfall totals are over coastal Louisiana where a swath of 8- to 10-inch amounts (yellow and orange areas) extends eastward from the Texas border to near Morgan City. Parts of the Keys and far southwestern peninsular Florida received up to 5 inches from Rita (green areas). Overall, the inland rainfall totals across the central Mississippi valley were not very high, generally less than 4 inches (light green to blue), as Rita rather quickly moved off to the northeast.

The Tropical Rainfall Measuring Mission (TRMM) satellite has been measuring rainfall over the tropics since its launch in 1997. The TRMM-based, near-real time MPA at the NASA Goddard Space Flight Center provides estimates of rainfall over the global tropics.