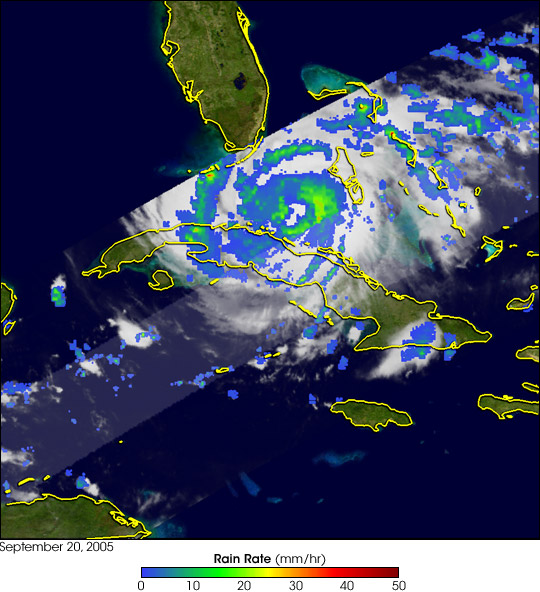 After the immense devastation brought by Hurricane Katrina, all eyes were on Hurricane Rita as it passed over the Florida Keys and the Gulf of Mexico. Rita formed from a tropical disturbance east of the Turks and Caicos Islands into a depression (TD #18) on September 17, 2005. The system moved west through the Caicos and strengthened into a tropical storm on the 18th before entering into the southern Bahamas.

This image shows the horizontal distribution of rain intensity within Rita measured by the Tropical Rainfall Measuring Mission’s (TRMM) sensors. Rain rates in the center part of the swath are from the TRMM Precipitation Radar (PR), the only radar capable of measuring precipitation from space. The PR can provide fine-resolution rainfall data and details on the vertical structure of the storm. Rain rates in the outer swath are from the TRMM Microwave Imager (TMI). The rain rates are overlaid on infrared (IR) data from the TRMM Visible Infrared Scanner (VIRS). The image was taken at 08:28 UTC (4:28 a.m. EDT) on September 20 as Rita was passing through the Florida Straits. Although the center of Rita does not fall within the PR swath, it is obvious from TRMM that Rita is becoming better organized. A ragged eye is present, surrounded by areas of moderate rain (green areas) with good banding in the outer rainbands, all signs that the storm’s circulation is improving. Rita was still a tropical storm at the time of this image, with sustained winds of 110 kilometers per hour (70 miles per hour). By early afternoon the same day, Rita would become a Category 2 hurricane as it passed south of the Florida Keys and headed for the Gulf of Mexico.

The TRMM satellite is one of a number of satellites being used to monitor Hurricane Rita and storms like it. Launched in November of 1997 to measure rainfall over the tropics, TRMM has proven itself to be a valuable platform for observing tropical cyclones, which include hurricanes and typhoons. TRMM is a joint mission between NASA and the Japanese space agency JAXA.