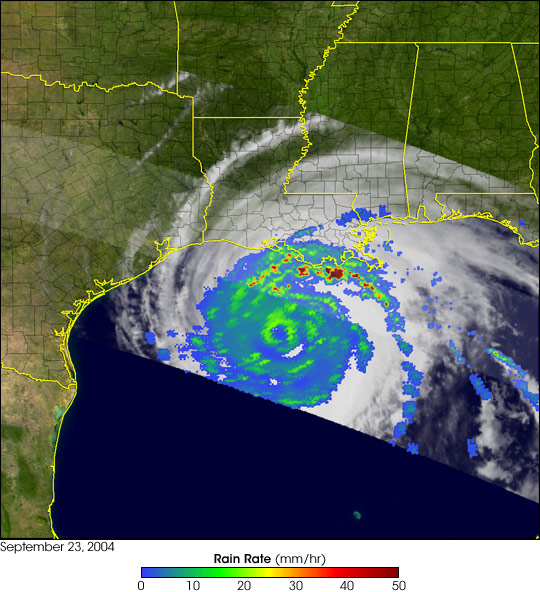 The onslaught from the 2005 hurricane season continued with the arrival of Hurricane Rita, the second Category 5 storm to threaten the Gulf of Mexico in less than a month. As it was passing south of the Florida Keys on September 20, 2005, Hurricane Rita was in the process of slowly intensifying from a Category 1 storm into a Category 2 storm. However, upon entering the Gulf of Mexico, Rita tapped into a deep layer of very warm water located in the southeast part of the Gulf associated with the Loop Current. This allowed Rita to undergo a process known as rapid deepening, which transformed it into a powerful Category 5 hurricane with the 3rd lowest air pressure ever recorded in an Atlantic Basin storm.

Fortunately, as Rita moved across the Gulf away from the loop current, it slowly began to weaken. The Tropical Rainfall Measuring Mission (TRMM) satellite observed Rita at 13:45 UTC (9:45 am EDT) on September 23, 2005 as the hurricane was passing south of the central Louisiana coast. The center of the storm lies within the TRMM Microwave Imager (TMI) swath. Areas of very heavy rain (dark red areas) associated with an outer rainband are approaching the the Louisiana coast. The eyewall is not as symmetrical as in earlier observations, one sign of a weakening storm. Rita, however, was still strong with sustained winds of 220 kilometers per hour (140 miles per hour) when this image was taken.

The TRMM satellite is one of many being used to monitor hurricanes and typhoons. Launched in November of 1997 to measure rainfall over the tropics, TRMM has proven to be a valuable platform for observing tropical cyclones and can provide unique images and information on these storms. TRMM is a joint mission between NASA and the Japanese space agency JAXA.